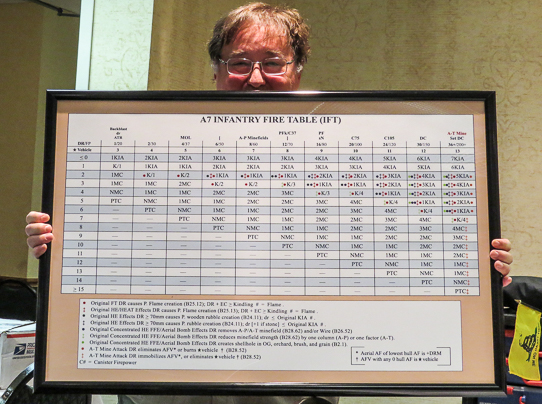 The World of ASL Compendium is designed as a comprehensive repository of consumer, player, collector, and historical information about every official or unofficial product ever made for ASL.  It debuted in 2006.  In 2014, it received a massive make-over along with the rest of the Desperation Morale website, with considerable re-organization (and new information added).

The World of ASL Compendium includes information on published ASL products, official and unofficial (or produced ASL products, in the case of non-publication accessories).  The items have to be specifically created with ASL in mind.  Products that are clearly marketing efforts (t-shirts, dice with a company logo on them, etc.) are not included.  Websites are not included (including videos, podcasts, discussion forums, and the like), nor are basic player-made web resources such as play aids and cheat sheets (such as those featured elsewhere on this site).  Non-pedigreed scenarios downloadable from a website are not included.  Tournament scenarios are not included unless they were subsequently made available to the wider ASL community (i.e., as a product).  Non-playtested and non-developed scenarios and campaign games are not included.  Non-inclusion does not mean that something is bad any more than inclusion means that something is good.

The World of ASL Compendium generally provides a separate page for each product.

Multiple editions of the same product are typically contained on the same page.  Exceptions include when a new edition is combined with another product, when it is so substantially changed that it is essentially a new product, and when the new edition is published by a different publisher.

Magazine-length publications that are ASL-devoted typically get one page per issue.  Magazine-length publications that are not ASL-devoted but only have some ASL content typically get only one page, with relevant ASL content (exception: articles/reviews) noted on that page for each issue.  Newsletters also get one page each.  They are divided into two classes:  newsletters that contain scenarios and those that don’t (based on the logic that scenario-hunters and completists are typically only interested in items with scenarios).

Most (but not all) publishers (exception:  newsletters) also get a publisher write-up separate from their products.  The way to find this is to use the Publisher selection menu on the World of ASL landing page.  When a publisher’s results are displayed, there is a link at the top of the results page that goes to the publisher description.

The photographs that appear on each page are thumbnails.  They can be clicked on to view a larger (sometimes substantially larger) image.

There are many ways to browse, peruse, or find information in this compendium.  All of them are available on the World of ASL landing page and some are available from other places, too.

Each product entry in the World of ASL compendium contains, in addition to other information, one or more paragraphs of description and commentary.  These commentaries are solely the opinion of the author; other people may have other opinions of these products.  Whenever possible, opinions were based on personal play and evaluation.  In cases where this was not possible, a good-faith effort was made to assess the general reputation a product has attained in the ASL community.

When the World of ASL compendium began, the commentaries were quite short and mostly descriptive.  As new products were added in the later 2000s, the commentaries began to evolve into more full-fledged (sometimes very long) write-ups or even genuine reviews.  Thus, items published before 2006 may have much briefer write-ups in the Compendium than items published after that date.  Some commentaries are the equivalent of full-fledged “reviews,” depending on how much experience the author has had with the product in question, while others are more like “first impressions.”  Most fall somewhere in-between, where the author has had some experience with the product but hasn’t necessarily played every scenario or campaign game.

The author has certain preferences, or “prejudices,” that may be reflected in some of these commentaries.  Other people may have different preferences.  The author’s preferences include the following: