1.SS-Panzerdivision Leibstandarte #6: Normandie, hereinafter 1SS, is a scenario pack depicting actions featuring units of the 1st SS “Leibstandarte” Panzer Division in Normandy in 1944. It is the 6th in a seemingly endless series of scenario packs from Lone Canuck featuring this Waffen SS unit. It is unfortunate that, out of the hundreds and hundreds of divisions that fought in World War II, so much effort would be focused on a Waffen SS unit.

Because the scenarios here are limited to a three-month period in a fairly narrow geographic area, in which one side is always fixed, there is not a lot of variety in terms of combatants and settings. The Leibstandarte appears in all the scenarios, of course; its opponents are British (3 scenarios), Canadian (2 scenarios), and American (3 scenarios).

Most of the scenarios are large in size, but this is a bit misleading, because many of the scenarios feature odd or disproportionate force mixes.  For example, in scenario LSSAH43 (Tommy Knocker), the British have 18 tanks and 7 squads, which would qualify the scenario as “large” in Desperation Morale rankings, but the opposing Germans have only 4 squad-equivalents and 6 tanks. The British tanks are all Shermans, of various types; the German tanks are all Panthers, so apparently the scenario is a shooting gallery sort of scenario (the British win by exiting 80VP).  In LSSAH44 (Shot and Roared), the Canadians have 16 squads and 6 tanks; the Germans have only 9 squads and 3 tanks.

Four of the scenarios have OBA; none use Night or Air Support rules. Three use Bocage rules.

One interesting feature of this scenario pack is that almost all of the scenarios randomize certain elements in order to provide additional fog of war. This is the first time Desperation Morale has a seen an ASL product deliberately combine a number of mechanics to create this effect.

One mechanic used, for example, are secret die rolls to determine things like HIP or concealment counters.  In scenario LSSAH44 (Shot and Roared), for example, The German player may make a Secret dr; the result (halved, fractions rounded down) is the number of MMC that may set up HIP. The German player may also make a Secret dr (+3), receiving that many concealment counters. Another scenario allow a roll for dummy minefield counters. In total, 6 of the 8 scenarios use this mechanic at least once. This may be a new dynamic not used in previous ASL scenarios.

Another mechanic used is blind simultaneous setup. This is a fairly uncommon ASL mechanic in which players prop up an extra board vertically in the middle of the playing area, obstructing each player’s view of the other player’s forces, and each player simultaneously sets up his units. Two scenarios use this mechanic.

A third mechanic used is random shellhole/rubble/blaze placement, which is fairly common these days. One scenario uses this mechanic.

A fourth mechanic appearing in this pack is non-set Gun CA. Used in one scenario, this mechanic has a player record the CA of his emplaced guns as normal, but when the Gun is initially revealed, a dr must be made.  On a 1 or 2, the gun uses its recorded CA. However, on a 3-4 its CA is actually one hexspine clockwise of its recorded CA, while on a 5 or 6, it must pivot one hexspine counter-clockwise.

A fifth mechanic (we have enough mechanics by now to open an auto repair shop) involves variable boards. In LSSAH45 (Unexpected Surprise), the boards are separated into two non-connected playing areas. The American player must separate his forces into 3 different groups. One group sets up on one of the play areas while the other group sets up on the other, non-connected play area. The third group is an offboard “Reserve” group. After having done this, the German player–whose forces all enter from offboard–chooses one of the playing area he will enter his forces on.  Only this playing area will actually be used for the scenario; the other boards (and American counters) are put away. The “Reserve” group will enter as reinforcements on the actual board used.

A sixth mechanic (now the mechanics are unionizing) involves random first move. In one of the scenarios, a dr determines which side moves first; that side has only half its movement rate. This is a risky mechanic unless very well playtested.

The pack also comes with a sprinkling of counters, twelve in total. They appear to be die-cut, but they are “loose,” i.e., individual, already separated counters in a little baggie. The counters are various British Shermans and do not appear to be new to the system but are seemingly intended as extras for scenarios requiring more such counters than appear in the official countermix. Because they are loose and small in number, players should take care not to lose or misplace them, if they decide not to add them to their standard counter storage system. 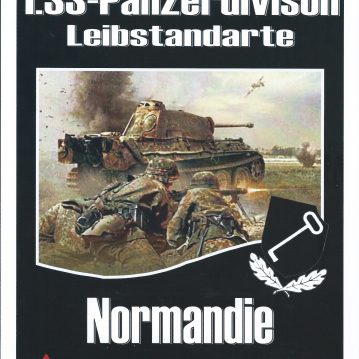