Gold Beach is a monster-sized historical module from Critical Hit depicting one of the British landing beaches at Normandy. It is part of Critical Hit’s ambitious effort to present the entire D-Day landings, from major beachheads to subsidiary or related Normandy actions such as the commando attack on Port-en-Bessin at the ASL scale (the whole series can be found here).

Critical Hit specifies that ownership of its Sword Beach module is required to play this one, but irritatingly does not explain what is actually required. Gold Beach is very similar to Sword Beach, released at roughly the same time.

The heart of Gold Beach is its massive historical map–which must be laboriously assembled from the 20 overlapping 12″ x 18″ glossy unmounted map panels that together make up the map. It’s certainly a chore with that many map panels (the map is significantly larger than that of Sword Beach).  The glossy paper makes the maps appear bright and crisp but can add unwanted glare depending on the angle of lighting in the room. The map artwork, depicting the invasion beaches, German fortified positions, Normandy hamlets behind the beaches, and a bit of hinterland, is generally good, though not phenomenal. Swamp and brush hexes are hard to make out in one portion of the map featuring lower-elevation terrain that uses a dark green color.

One of the map panel contains a useful key to some of the unique fortifications that appear in different places on the map.

Critical Hit has provided identifying labels to the map panels to make them easier to assemble. The hexes on the Gold Beach map are slightly larger than standard ASL geoboard hexes, though smaller than the hexes used in some historical modules. They ought to be okay as long as the stacking doesn’t get too intense. Villages and a few other features are named, but more names would have provided more color and made for a more interesting map. Part of the reason the map is bland is because of the terrain itself, but that is no fault of Critical Hit; the Allies deliberately sought a safe, bland beach upon which to land.  The artwork is decent. Critical Hit maps of this era often have real difficulties with buildings, but the buildings in Gold Beach seem fine.

Needless to say, it takes a lot of room to hold the assembled map.

Gold Beach also comes with a veritable armada of counters (more than 2,200), but the counters are quite disappointing, largely because the British and German counters do not come in standard British and German colors but rather in weird alternative colors. The Germans appear in a shade of gray that Critical Hit dubs “feldgrau” (though it is not actually feldgrau and resembles the color of Finnish counters more than anything else).  Even worse are the British, who come in what Critical Hit calls “Khaki,” but which is not Khaki at all. The color looks more like a mustard or olive green–which makes the British actually seem rather like Americans.  Luckily, perhaps, players can use their own official British counters in lieu of most (though not all) of the counters here.  The counters could also do with some stronger die-cutting.

Critical Hit does not number the countersheets, but here are their contents (in most cases identical to those of Sword Beach):

Gold Beach is governed by 10 pages of rules, though several pages are actually historical background, charts, or diagrams. The rules basically govern terrain types and fortifications, including some fortifications printed on-map and others provided through counters. Other rules govern new types of demolition charges, as well as a “Bangalore hero” to help set them off.  Some of the fortifications are moderately complicated but they are not too bad.

Perhaps the most interesting scenario is Gold 3 (Fire and Water), a landing scenario that features the landing of British armored units, including 14 Sherman amphibious tanks.

Critical Hit claims that there is a “Bonus Campaign Game” but it is not a campaign game but rather a monster scenario (and counted here as a scenario). That 24 turn scenario depicts the whole initial stage of the Gold Beach landings and features a huge number of its.

Any Critical Hit product of this era may suffer from problems in development and balance, and it is not clear to what degree the scenarios here may have been playtested (no playtesters are specifically listed). However, it is possible that D-Day aficionados might wish to acquire this monster product regardless, taking their chances.

Update:  Sometime in 2018-2019, Critical Hit released (separately) a “Monster Map Set” for Gold Beach. This product simply expanded the size of the hexes on the map, using more 12″ x 18″ map panels to display the map area. The original Gold Beach maps take up a very large playing area; few players would likely have the space for these steroid-enhanced maps. 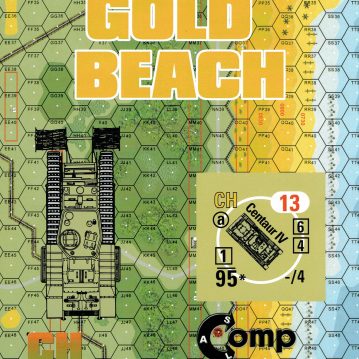