This particular offering, one of the Soviet dice in the series, is a red die with white pips.  Instead of a typical 1-facing, the die instead has a gold foil image of Lenin (yes, that Lenin) and Cyrillic wording around the image that seems to say 62nd “Order of Lenin” Army.

In addition, the 2- and 3-facings have ROF indicators on them in gold foil to help players remember ROF.

Overall, it is an attractive die.  The other two Soviet dice in the series are both white, so the Soviet subset has a somewhat awkward combination of one colored and two white dice, rather than dice of three different colors, which is more practical in ASL terms. 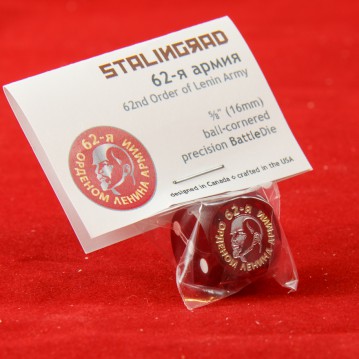