In this scenario pack, the troops of the Prinz Eugen are represented rather generously as elite squads.   Tito’s forces, interestingly, are also overrated, George Kelln apparently deeming that the partisans’ declaration of a National Army of Liberation actually gave them a regular army (when in fact they remained a partisan force all the way to late 1944).  Unfortunately, they are also given Soviet SW, when in fact, the bulk of their SW in 1943-1944 was Italian, with substantial minorities of German and British equipment.  They had no Soviet SW until the Soviets actually linked up with them in late 1944 (and there is not a single PIAT in this pack).  All in all, it is a fairly ahistorical way to represent Tito’s partisans in 1943-1944, which is a shame, because this is one of the few ASL products to feature partisans significantly.  Bulgarians and Italians make guest appearances (including an Italian vs. German scenario and a Bulgarian vs. German scenario).

The scenarios have not seen much play since their release. 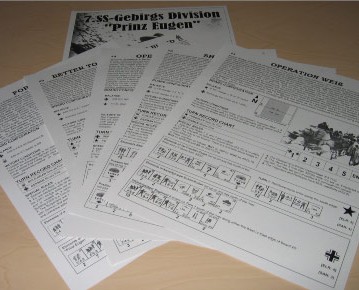