Home > Products > A Bridge Too Far

A Bridge Too Far (ABTF), as its name suggests, portrays the valiant but doomed defense of Arnhem Bridge by Colonel John Frost’s battalion of paratroopers during Operation Market-Garden in September 1944, made famous by the book and movie of the same name.  With three campaign games and 9 scenarios, ABTF is a meaty module, one of the first two published by MMP (Blood Reef: Tarawa is the other) following the demise of Avalon Hill.  Blood Reef: Tarawa was a re-design of an earlier work by Heat of Battle; while ABTF was not based directly on Heat of Battle’s God Save the King, Heat of Battle did contribute to the module.

ABTF is another city-fighting module, pitting elite SS against elite British paratroopers (except for Red Barricades and Operation Veritable, all official HASLs/HSs have emphasized elite troops, typically SS, paratroopers, or US Marines).  Its campaign games do not have the attractiveness of many others, because the British are basically surrounded; not only can they not purchase reinforcements, but as the campaign wears on, their force continually disintegrates (due to ammo shortage, walking wounded, etc.).  It accurately portrays the desperate, “last stand,” nature of the conflict, but that very realism may make some people less willing to try the campaign games.

ABTF CG I (Block by Bloody Block) has 6 campaign dates, while ABTF CG II (A Dark and Fateful Day) has 9 campaign dates.  ABTF CG III (A Bridge Too Far), the largest of the three, has 16 campaign dates and can be grueling for the British player, who also has little chance to win.  Some of the scenarios are unbalanced as well.

It is interesting to compare ABTF to its Critical Hit “competitor,” Arnhem: The Third Bridge.  The latter product has a much more attractive map than ABTF, but even its designer has admitted dissatisfaction with the way its scenarios and campaign turned out.  Overall, ABTF looks like the better buy.

In one respect, ABTF is controversial:  it includes a complete (squads, support weapons, guns and vehicles, although certain units were missing and appeared in ASL Journal #2) SS order of battle featuring black counters with white lettering.  For the uninitiated, it may take some explaining as to why this was controversial.  When SS units first appeared in the original Squad Leader series of games, they were featured with black counters with white lettering.  However, when Beyond Valor introduced the SS to Advanced Squad Leader, SS units were now treated just like every other German unit–they appeared on blue counters with only a small “SS” symbol to indicate that they were SS units.  This did not sit well with some ASLers, a few of whom may have been over-fond of the SS, who called out for white-on-black ASL counters for the SS.

Eventually, a third party publisher, Heat of Battle, responded to this perceived desire and published two products featuring the Waffen SS that included a white-on-black SS countermix.  It was apparently in response to this move that MMP decided to include an entire white-on-black SS order of battle with A Bridge Too Far.  The decision pleased some, who finally had their “official” black SS counters, but it dismayed many other ASLers, who could not help but observe that of all the combat forces of World War II, only the SS had been given their own set of counters with their own unique color scheme.  These detractors argued, with some merit, that this glorified the Waffen SS.  Others complained simply that all these extra counters needlessly added to the price of A Bridge Too Far. 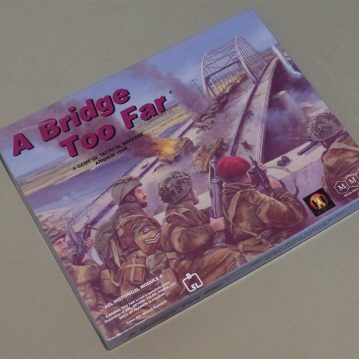