Home > Products > A Fistful of Scenarios

There’s nothing like a good spaghetti wargame, is there?  While an Ennio Morricone score plays in the background, your sharp-shooting Sherman aces a round of APCR right down the barrel of that Tiger, and your opponent wails “Blondieeeee!”

Maybe you’ll experience that with A Fistful of Scenarios, a small scenario pack brought to the ASL world by the North Texas ASL group featuring scenarios designed by Ed Beekman, Arlen Vanek, Chris Kubik, Ralph Garringer, and Matt Evans. It’s always nice when a new ASL publisher appears on the scene; one never knows how their vision and their products might enrich the ASL world. The pack here was intended to be released in conjunction with the 10th anniversary of the North Texas Shoot Out ASL tournament.

The layout and appearance of the scenarios of this pack is virtually identical to that of the Kansas City March Madness packs, a fact explained that Rick Reinesch did the art and layout for both. It’s a little strange he didn’t choose a different look and feel for the North Texas guys. If someone saw a stray scenario from this pack, they could be forgiven for thinking it somehow slipped out of one of their March Madness packs.

Intended for tournament play, the scenarios are all small- or medium-sized. None use OBA, Air Support, or Night rules, but a number of them have extensive SSRs of their own; only two scenarios are of the “quickly put your pieces down and start playing variety.”  Geoboards required (see also NTX01 description, below) include 3, 8, 20, 42, 52, 64, 68, and 78.

NTX01 (Stalingrad-1 Depot) is a scenario set in Stalingrad that uses a small portion of the Valor of the Guards historical map, as well as VotG counters and rules.  Although set in Stalingrad, the vague historical description and the units mentioned in the respective Soviet OBs suggest that the scenario may be a generic scenario rather than based on an actual historical tactical action. The Soviets are identified only as “62nd Guards Army,” by which one presumes they meant 62nd Army (as the 62nd Army was not a Guards formation at Stalingrad and when it was granted Guards status it was renamed the 8th Guards Army). The 62nd Army was the parent formation for all units that fought in the city of Stalingrad (except for the southern outskirts, where the 64th Army reigned).  Meanwhile, the German unit involved is “Regiment 271.”  The German 271st Infantry Regiment was one of the regiments of the German 93rd Infantry Division, which fought not at Stalingrad but in Army Group North.

NTX02 (They Came Like the Sun) is a PTO scenario pitting 12 Japanese 4-4-7 squads against 8 Australian 6-4-8 and 4-5-7 squads in a replication of the opening engagement of the early 1943 attempt by the Japanese on New Guinea to take the inland Australian stronghold and airstrip at Wau (maintained and supplied entirely by air).  The board chosen, board 78, is not a bad representation of what the ridge defended by the Australians looked like.

NTX03 (The Scugnizzi Boys) is set in late September 1943, weeks after Italy surrendered to the Allies and the Allies themselves landed at Salerno. In these early weeks, the citizens of Naples, in southern Italy, rose up against the Germans–who responded the way the Germans typically would against such uprisings. This scenario features 7 German squads and two AFVs pitted against 3 Italian squads and 5 partisan squads. An SSR grants the partisan units the ability to automatically become concealed at the end of a turn if they are in a building empty of enemy units–even if in LOS of enemy units. This is one of the smallest scenarios.

NTX04 (Into the Woods) is another scenario with partisans. This East Front scenario features several groups of partisans defending their camp from an assualt by several groups of German anti-partisan forces. Both sides get VP for several things, but especially for controlling Partisan camp hexes and exiting or destroying 5 squads of “civilians.”  The Partisan camp hexes are hidden from the Germans at the start of the scenario (don’t believe anybody telling you they are on Dantooine).  There are several paragraph long SSRs accompanying this scenario, which may turn off those who wish simply to pull and play.

NTX05 (Victory over the Saar) features an American attempt to grab a bridge, or at least what’s left of it (it has a Set DC on it and may not last the whole scenario). If you like scenarios with Very Heavy Mist rules from Kampfgruppe Peiper, then this is the shadowy scenario for you.

NTX06 (A Veritable Delay) is set during Operation Veritable (get it?) and is a British-German action with 8 British squads in 8 Ram Kangaroo’s supplied by the “49th Royal Tank Regiment” (it had actually by that time been renamed the “49th Armoured Personnel Carrier Regiment”).  The scenario uses Board 3 but per an SSR that some ASLers may find annoying, all hills are declared level 0 Open Ground.

As of this writing, the scenarios have not yet received enough playings to determine if there are any “fan favorites” yet. 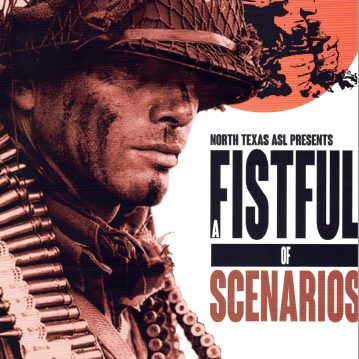