Strictly speaking, A GI’s Dozen did not contain original scenarios but rather featured 13 converted scenarios from the original Squad Leader series (from GI: Anvil of Victory and Series 300) to Advanced Squad Leader).  First Avalon Hill, then MMP had embarked upon a (dubious) program of converting all of the official Squad Leader scenarios to full ASL, publishing them in a variety of different places (see relevant tag).

All the scenarios in GI feature Americans, typically fighting Germans (in one scenario they fight Vichy French).

This was not one of MMP’s best products.  With only scenarios as contents–no maps, no counters, no overlays or play aids or rules pages, it seemed a rather bare-boned offering compared to, say, the Action packs.  Moreover, most of the scenarios weren’t stellar and don’t receive very much play.  Among the better scenarios in A GI’s Dozen are U3 (The Factory) and U7 (Han-Sur-Neid).

A GI’s Dozen is rumored not to have sold particularly well–there are suggestions, ultimately unprovable, that this was because many people copied the scenarios from friends instead of buying their own copy of the scenario pack.   It was a number of years before MMP released another pure scenario pack.

Almost a decade later, MMP produced another similar set of converted scenarios, Turning the Tide.  In 2013, MMP released a final such set, Rivers to the Reich. 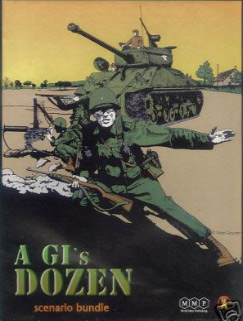