Contents:
3 small historical maps, 235 (homemade) counters, rules, 4 scenarios (plus a "bonus" for E-bay buyers of "three other scenarios and two more maps on the British commandos in World War II")

The first thing that should be noted is that this product should NOT be confused with the similarly themed St. Nazaire: Operation Chariot, which came out the same year, published by Le Franc Tireur.  THAT product is a professionally designed, developed, playtested, and published product by people who know how to put out an ASL product.

THIS product, the product reviewed here (clumsily described as “a variant for the ASL”), is a hastily thrown together quickie.  Although even the typical ASL scenario pack takes at least a minimum of a year to design, develop and playtest, Bill Wilder came out not just with this product but four other new ASL items all at the same time, only a few months after a previous batch.  Clearly, no tender loving care went into this product.  It is difficult to know which to dislike more; Bill Wilder and First to Fight for releasing these products into the ASL market, or the anal retentive ASL completists and occasional naive consumers who actually buy his items at exorbitant prices and give him impetus to churn out more dreck.  To directly address the latter category, the buyers:  YOU ARE PART OF THE PROBLEM.

This “product” offers a historical introduction, a few pages of rules, some crudely designed “historical” maps (contrast with the Le Franc Tireur product), homemade ship and ground counters, and a “system for keeping track of naval movement and damage to the ships.”  Three scenarios each depict part of the attack on St. Nazaire, while a fourth is a “mega-scenario” that combines them.  For some strange reason, also included is a “small contingent of SS troops” counters, though they are not used in the product.  For amusement, look at the “orchards” and the large buildings on the map sample.  Think these are accounted for in the rules? 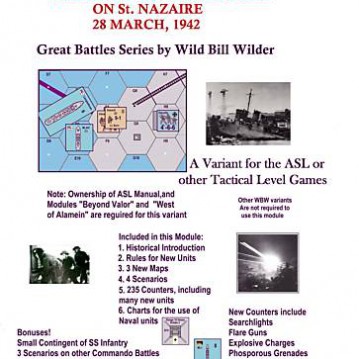