In the early 1990s, the rapid growth and equally rapidly growing enthusiasm of the ASL community caused a variety of ASL newsletters to appear.  Most of them died a quick death, as their producers found out how much work it actually took to publish something, especially something of quality, and especially something with quality ASL scenarios in it.  ASLUG, an ungainly acronym for the equally ungainly Advanced Squad Leader Union of Gamers, was one of these short-lived ASL newsletters, published by Texas ASLer Gary Fortenberry.

Fortenberry announced that the “main objective” of ASLUG was to “report on, and improve tournament play.”  A secondary objective was to provide original ASL scenarios and to help ASL players find each other.  However, in its opening issue, Fortenberry also confessed that he was “a little undecided as to what ASLUG should encompass,” which didn’t necessarily bode well for its vision.  A typical issue of ASLUG would contain two new scenarios, some designer’s notes, tournament reports, and an article or two.  The initial issue was only 6 pages long, but some subsequent issues were substantially longer.  In mid-1993, Fortenberry announced that he had acquired the ASL newsletter At the Point and would combine the two into one newsletter.

Today, most experienced ASLers would know that a monthly publication dedicated to ASL would be almost certainly doomed to failure–that is quite a grueling schedule–but back then folks just had to find out for themselves, as Fortenberry himself did.  By the end of the year, ASLUG had fallen on hard times, with no new issues coming out.  In March 1994, Fortenberry told the ASL News that he would combine it and the ASL newsletter Fire for Effect into a massive 50-60 page ASL magazine to be published 5 or 6 times a year.  This never happened.  In May 1994, Robert Wolkey of Fire for Effect announced to ASL News that he and Ray Tapio would form a new ASL publication, Critical Hit, and had purchased the unfinished scenarios and articles from the “defunct” ASLUG from Gary Fortenberry.  Subscribers to ASLUG were left with their subscriptions unfulfilled.  Later that month, it was announced that Gary Fortenberry would go to Avalon Hill to help manage their ASL line of products, insuring that ASLUG was indeed dead.

During the brief time that it lasted, ASLUG did, however, publish some good tournament-sized scenarios that continue to be played today.  Some of them were later reprinted as “official” ASL scenarios (particularly during Fortenberry’s later tenure at Avalon Hill).  Particularly worth trying are ASLUG1 (Beyond the Pakfronts), ASLUG3 (Tough Nut to Crack), ASLUG6 (One Step Forward), ASLUG12 (One-Log Bridge), the classic ASLUG14 (Morgan’s Stand), and ASLUG19 (The T-Patchers), among others.  ASLUG contained one of the best collections of newsletter scenarios of the 1990s.

The quick rise and fall of ASLUG makes one wonder what might have happened instead if ASLUG had been started as a quarterly or even twice-yearly publication–might it have lasted a lot longer as a result?  Alas, we will never know.

Gary Fortenberry later generously allowed people to post the contents of the eight issues of ASLUG, including scenarios, on-line.  They can be found here and elsewhere. 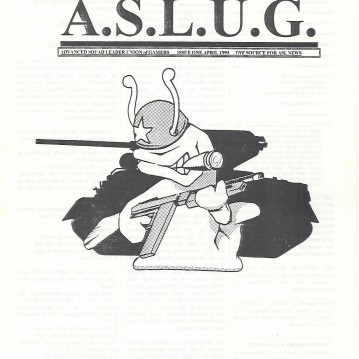