Action at Carentan!, designed by Ray Tapio, is a small historical module featuring a handful of scenarios that star paratroopers from the 101st Airborne Division in the hedgerows outside Carentan in Normandy on D-Day.  The map features an unassuming mix of fields, buildings, and woods (see 2nd Edition comments for concerns about its accuracy).

The four scenarios are mostly tournament-sized, not too large or too small.  The most interesting is AaC3 (Green Devils), which is extremely replayable.  The orders of battle for both sides are divided into a number of groups.  Players randomly choose who will go first; that player places one of his groups in one of a number of designated setup areas.  The second player then places one of his groups in one of his own setup areas.  Rinse, lather, repeat.  Players then randomly determine who goes first.  Because the different setup areas are all over the map, forces begin intermingled.  These setup rules create a wild and woolly situation every time, as every unit feels isolated and surrounded.  It is a very interesting and fun scenario that seems quite balanced.

This is not the reincarnation of Red Barricades, but this tiny module is not a bad buy.  It has some fun scenarios.

2nd Edition (i.e., Action at Carentan II) Comments:  Quite some time after first printing, Critical Hit issued a second edition of Action at Carentan in the summer of 2013, costing about twice as much ($32.95) as the original cost.  The review copy purchased failed to come with any scenarios (typical Critical Hit quality control), but the product is supposed to have four scenarios.  The new map (see below) would seem to necessitate some major changes to these scenarios from the originals.

The major difference is the map.  Instead of the single original historical map, the new Carentan comes with 2 12″ x 18″ light cardstock maps.  The area of the new map is considerably greater, but more importantly, the terrain appears to be completely different.  The maps of the new edition do not resemble the original map in any way, which is honestly very confusing and makes it seem as if the earlier map was concocted out of thin air rather than based on historical terrain.  The naming of certain terrain features on the new version makes it seem to have at least a little bit of verisimilitude.  Generally speaking, the new graphics are an improvement over the older graphics.

Unfortunately, CH did not pay to have the maps folded in half.  They are large, flat maps, which makes the product larger and more awkward to store than other official or unofficial ASL products–unless the user folds the maps himself.  Players should be warned that, unfolded, the maps are susceptible to being bent.  Moreover, the use of nonfolded maps also apparently necessitated Critical Hit abandoning a ziplock bag for storage, simply encasing it in shrinkwrap instead.  This means that, after opening the product, ASLers will not be able to store the product in its original packaging unless they carefully cut a slit open in the shrinkwrap to preserve it.  Critical Hit clearly needed to fold the maps.

Additionally, CH also did not cut the maps.  This means that there are white borders all along the edges of the two maps that must be cut away (as with an overlay) in order to use the maps.  This build-it-yourself kit-like approach is quite irritating.

The countersheet included with the new edition is superfluous (and actually printed for a different product), as all of the counters (U.S. infantry counters) are duplicates of counters already in the system.

3rd Edition (Large Hex Edition) Comments:  In 2017 or 2018, Critical Hit released yet another edition of this product, for the amazing price of $69.95 (i.e., more than twice the cost of the previous edition).  This edition, the so-called “Large Hex Edition” contains a map with larger hexes, though Critical Hit does not explain how big the hexes are and Desperation Morale has not examined a copy of this edition of the project.  This edition also contains a sheet of U.S. airborne Infantry/SW counters. The scenarios are allegedly printed in color, though this is not explained. It is hard to imagine anyone willing to shell out such a large amount of money for what is actually a very modest product. Any of the previous editions will bring just as much joy. 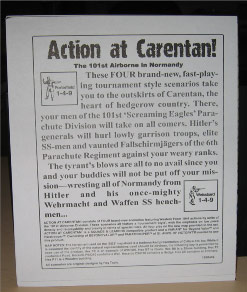