Oddly, MMP is not selling this product from its own website, but rather from the rather obscure Wargame Vault site, where it can be had for $59.99. It comes in the form of a 708-page, 77.43MB PDF file, watermarked with the name and order number of the purchaser.   You pay for it, download it, and apparently can have as many copies of it as you need.

The EASLRB contains all the materials in the standard ASL rulebook (including Chapter K, ugh), as well as complete Chapter H materials, Chapter J (DASL), and Chapter W (Forgotten War/Korea).  Chapter S (Solitaire) is NOT included.

Supposedly all known errata as of August 2020 was incorporated into the EASLRB, making it currently the closest thing MMP has to a long-overdue 3rd Edition Rulebook.

The rules come bookmarked, so (depending on your PDF reader) you can display a pane on the left-hand side of the window with collapsible menus for chapters and cardinal numbered rules. The upshot of this is that it makes navigating the EASLRB very easy.  The rulebook itself also appears to be fully hyperlinked, so you can use the links to go back and forth between rules references (though in some PDF readers the mechanism for going backwards is a little awkward).

The desert rules will supposedly be updated when the new Hollow Legions comes out. MMP also promises other updates, including errata as well as “additional chapters.”  It would be extremely useful to have all the historical ASL module and supplement chapters in this format as they collectively take up a ton of print pages (primarily because most of them repeat the same campaign game rules).

In addition to the rules, MMP also seems to include a complete set of charts and tables (including the Korean War tables), which is a nice feature.

There almost certainly are coding or other errors in the document that will be found and need to be corrected, but overall, the job looks very well done, and many players who have created or cadged homemade EASLRBs over the years would probably be tempted to use this one instead.

One just hopes that MMP keeps its promise of additions and updates a little bit better than they kept their 2001 promise of an EASLRB in the first place! 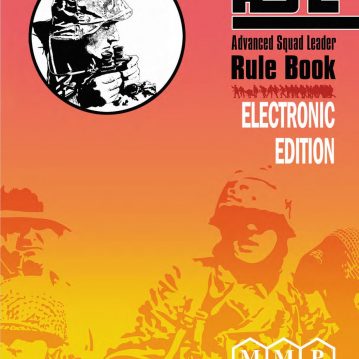