The 2nd Edition of the ASL Rulebook was published by MMP in late 2000 because the 1st Edition was long out of print and would-be ASL players could not even buy the rules.  Additionally, many years of errata and clarifications had accumulated and needed to be incorporated into the rulebook.  The 2nd Edition was designed to do this.  It came in a slightly larger three-ring binder than the 1st edition did, but without a matching slipcase.  The type was slightly larger than in the original, making the rulebook easier to read.  Years of errata were incorporated into the rulebook, and some rules sections, such as Wall Advantage, were re-written.  Additionally, Chapter E (originally appearing in Yanks) and Chapter K (originally appearing in Paratrooper and elsewhere) now came with the core rulebook.  However, Chapter N, the Armory chapter, did not.

Compared to the 1st Edition, the 2nd Edition Rulebook was printed in small quantities, which sold out much faster than MMP anticipated (probably because they underestimated the number of veteran ASLers who wanted to purchase a new rulebook).  As a result, the 2nd Edition Rulebook was not in print very long and copies were in demand on E-bay.  MMP has reprinted the 2nd edition rulebook several times.

The Issue of Errata

Since the 2nd Edition ASLRB came out, MMP has issued errata (but no errata pages) in issues of the ASL Journal.  ASL players who wish to keep up with the latest rulings and errata should make sure to purchase each new ASL Journal when it comes out. MMP did release several replacement pages in 2000 or 2001 incorporating some of the earliest errata available only as downloadable PDFs on MMP’s website:  A15/16, A53/54, B7/8vB, and D5-D8vB.

In 2005, MMP reprinted the 2nd Edition Rulebook without any changes, except for fixing most (though not all) of the errata in the charts and tables.

In early 2006, MMP issued the first actual physical new errata pages to the 2nd Edition rules; these pages came with Armies of Oblivion and mostly involved new rules for impulse movement (such as human waves, platoon movement, etc.).  These pages are A51-A62; D21-26; S27-34 (they are also available for download from MMP’s website).

In 2007, MMP created a new binder design to go with its rulebook (but this did not signify any changes in the rules themselves), featuring more attractive (and less Germano-centric) artwork.

These pages for some reason were not included in subsequent reprintings of the ASLRB, meaning that as of 2007, ASL players need to have Armies of Oblivion to have the most recent versions of the ASLRB pages.

Much of the Journal-issued errata for which no new pages were printed is nevertheless available as “sticky errata,” which can be downloaded, printed out on a label, and stuck onto the original rulebook page.  See http://www.multimanpublishing.com/ASL/aslqa.php and http://home.no.net/oboe/sticky.html.

As of 2014, nearly a decade and a half after the publication of the 2nd edition, the mounting errata has accumulated to such a degree, that a 3rd edition rulebook is sorely needed. 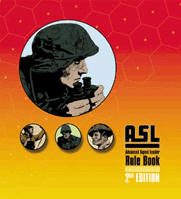