Although it introduces new rules, ASLSK2 neatly sidesteps the trap into which original Squad Leader fell (wherein each subsequent expansion module introduced a new rulebook and made the series more confusing) by including a new rulebook that incorporates all of the ASLSK1 material (highlighting any changes to the original manual for ease of transition).  As a result, should someone be so inclined, they could even skip the purchase of ASLSK1 and start with ASLSK2; it stands completely on its own.  It is a nice solution to the problem.

ASLSK2 introduces two more geomorphic maps to the system, one of which is boring, but the other, a hilly urban board, actually offers some real possibilities to scenario designers. 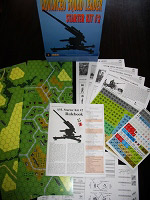