Fifteen years after MMP introduced the ASL Starter Kit, it still continues to publish Starter Kit projects. It’s perhaps the slowest start since the 2008 Detroit Lions. At some point, one would hope that ASLSKers would stop starting and start finishing learning how to play ASL. Of course, why would they, if MMP keeps publishing ASLSK products?  Products like this one, the Advanced Squad Leader Starter Kit #4: Pacific Theater of Operations (hereinafter ASLSK4), which introduces ASLSK players to the PTO and to the U.S.M.C., at least in a truncated version.  The reality has long been that MMP split their audience, with many ASLSK players never bothering to learn full ASL.  Some ASL players might not think that this would matter to them, except that every ASLSK product published is either an ASL product delayed or perhaps never published.

The heart of ASLSK4 is its rules, all 36 dense pages of them. The contrast between the rules need to play ASLSK1 (12 pages) and the rules needed to play ASLSK4 is immense; one cannot simply leap into ASLSK4, though presumably many of the people who play it will have previously played one or more of the previous ASLSK modules. It should be noted that there are now a million versions of the ASLSK rules, including those for ASLSKs 1-4, the version that appeared in the ASLSK Expansion Pack #1, the updated version of ASLSK1 that appeared in the “10th Anniversary Edition,” and perhaps more.

The rules for ASLSK4 were not really written with an eye towards the PTO. Rather, they are the standard ASLSK rules (with errata and additions, see below) with PTO rules taped onto the end.  In other words, the PTO rules are not integrated with the rest of the rulebook. The PTO terrain does not appear in the section on Terrain types, for example. The rulebook also contains a number of rules that are not relevant for this module, such as Panzerschrecks and Panzerfausts.  Oddly, too, the designers made the decision to include all the vehicle rules, though of all the possible ASLSK modules one could think of, this would be the one that could most easily be made easier to learn by excluding vehicles. After all, the module introduces only 3 Japanese AFVs and three U.S. AFVs. All of that could have been left out and new players would not have had to learn those portions of the rules. Some purchasers have also complained, with some legitimacy, that almost all of the examples in the module (all except those in rules section 8) use units that do not appear in ASLSK4. That is because the examples are the same examples used in previous modules, featuring Germans and Soviets and Americans. They were not replaced with ASLSK4-relevant examples for this module. It seems clear that the ASLSK4 rulebook could have been designed from the get-go with a PTO-focus, but it was not.

What rules are included? Leaving aside added errata and clarifications, the new rules amount to these:

Unlike the rules, the player charts are PTO-specific (so only PTO terrain appears on the Terrain Effects Chart, for instance).

ASLSK4 comes with three 8″ x 22″ geoboards, (m, n, and o). Together, they illustrate how difficult it is to truly represent PTO terrain using ASLSK rules. Gone are streams, gullies, formidable hills, swamps and marshes. The mountains of New Guinea are nowhere to be found. The mandate that ASLSK boards have a max of only one level of elevation difference is a real limitation here.

As a result, the boards tend to be bland. Board m features a fairly open area, dotted with five multihex patches of kunai, as well as an approximately 4-hex by 8-hex level one hill. Some jungle, palm trees and huts round out the board. It might be suitable for some areas of Burma. Board n is basically a woods/jungle board, consisting mostly of jungle hexes, with a few clear areas and a long path/road running through it. It’s all level zero terrain. It’s more or less another board 52.  Board o is patchy jungle, with a nicely triskele-ish level one hill and a smaller level one hill near the center of the board. Some kunai, huts, and palm trees round out the board. It could be used to represent parts of Burma or coastal areas of Luzon.

In a strange inversion, ASLSK4 credits only 6 people as playtesters, but no fewer than 21 people as proofreaders.  If you spot an error, you’d damn well better get your money back.

Obviously, the main audience for ASLSK4 is for ASLSK players who have no particular interest in moving on to full ASL, although it is theoretically possible that some people could play a few of these scenarios as “prep” work for learning the Japanese/PTO in full ASL. 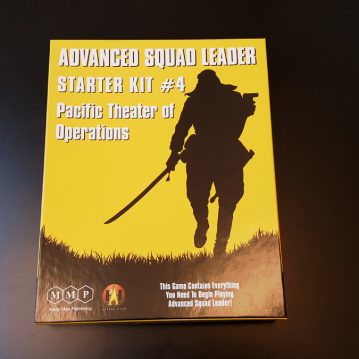