The Advanced Squad Leader Starter Kit Expansion Pack #2–a product that takes longer to say the name of than to play it–is the eighth product in MMP’s ASL Starter Kit series and the second Expansion Pack for that series. The ASL Starter Kit (ASLSK) was created a subset of the full ASL rules compiled to provide players with an easier entry into the ASL system.  It serves that purpose admirably. However, the decision to make ASLSK into an entire line of products means that now it also represents a rival and competitor to full ASL. Many people now do not even bother to get into full ASL, instead sticking with the ASLSK system.  Desperation Morale supports the idea of ASLSK as a learning aid but deplores the idea of it as a separate system.

The Advanced Squad Leader Starter Kit Expansion Pack #2 (hereinafter EP2) is, more than anything else, a sequel to the ASL Starter Kit #4, which introduced the PTO to ASLSK players. EP2 exists primarily to add the Nationalist Chinese to the ASLSK system and all of its scenarios are PTO-oriented.

The previous Expansion Pack, as well as all four ASLSK Starter Kit modules, all included a full ASLSK rulebook.  EP2, however, does not.  Instead it merely provides a four-page rules insert made from a folded 11″ x 17″ sheet of paper. This means that, as of the publication of EP2, the full ASLSK rules set now consists of the ASL Starter Kit #4 rules, the page of hedge rules from the ASLSK Bonus Pack, and the 4 pages of EP2 rules, in addition to the 12 pages of Chapter H-style rules of ASL Starter Kit #3. That’s about 53 pages of rules.

The EP2 rules introduce the Chinese, who are much easier than the Japanese to introduce. They can conduct Human Waves and use Dare-Death Squads.  Ironically, in ASL, Banzai Charges are variants of Human Waves, while in ASLSK, Human Waves are variants of Banzai Charges.   Allowing Dare-Death Squads also introduces the concept of Berserk units into ASLSK. With one exception, the rest of the rules in EP2 simply provide Ordnance/Vehicle info for various Chinese, Japanese, and Dutch equipment. The Chinese OB includes 5-3-7 squads, but they are not described as being different from other squad types.

This is a little surprising, as the board 14 runway is something that ASLers routinely make fun of for its unrealistic shortness (even fighter strips tended to be much longer than the board 14 runway), while the EP2 version is shorter still.  If one assumes the airstrip extends from hexside to hexside, then the longer EP2 runway would measure 240 yards long.  How useful is this?  We can compare it to one of the most common early war U.S. fighter planes, the P-40. A P-40 required 267 yards of runaway to land (assuming no trees or other obstacles were in the way).  Okay, so this is only a half-hex or so off; perhaps we can be a little loose here.  However, note the length of runway required to take off for a P-40:  375 feet.  So a P40 maybe could land on the EP2 airstrip but it sure as heck couldn’t take off.  Nor could any larger fighter, or virtually any bomber at all.

The countersheet, which is up to the usual high quality for MMP counters of this era, consists of Chinese Infantry/SW (about half) and a mix of Japanese, Allied Minor, British, and American/Filipino counters, with a few berserk counters thrown in.  The Japanese do get a flamethrower, so perhaps there can be a little “burn ghurka burn” action going on at some point.

EP2 also brings two more geoboards to the ASLSK (and ASL) system: boards l and k. Board l is basically a rural board with a PTO bent. There are three wooden buildings on one half, and a handful on the other, as well as an oddly shaped one-hex stone building that may be intended to be a temple of some sort. The rest of the board consists mostly of woods/jungle, orchards/palm and very poofy grain/kunai.  Given the inherent limitations of ASLSK boards (a very restricted terrain palette), it seems okay.

Board k is an urban board, perhaps intended for places like Shanghai, full of multi-hex stone buildings, many resembling rowhouses (sans black bars).  MMP’s building artwork of this era is always nice and detailed.

The scenario S76 (A Less Peaceful Christmas) contains a historical error; the Filipino player in this scenario has two 60mm mortars. While there were 60mm mortars in the US/Filipino arsenal on Luzon in 1941-42, there was no ammunition for them, so they were not used (some units were able to exchange them for extra MG).

EP2 will be interesting to ASLSK players who have ventured through ASLSK products all the way to the PTO but are still afraid of full ASL.  For ASL players, it will likely only be purchased for the boards. 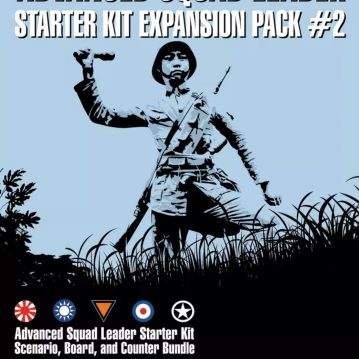