Afrika Korps-Along the Via Balbia (AK-AVB) is the 10th in Critical Hit’s Afrika Korps 12-part series of scenario packs, all of them converted from its ATS tactical game system. Ownership of both Afrika Korps-El Alamein and Afrika Korps-Battle of Gazala is required to play the scenarios in this pack; thus it costs $144 to play a single scenario in this pack.

The scenarios in this pack take place from 1941 to 1942, from Egypt to Tunisia, and have no unifying theme other than the loose commonality of being set somewhere near the Mediterranean coast. In essence, this is a grab bag of desert scenarios. Nationalities featured include the British/Commonwealth, French (3 scenarios), Italians, and Germans.

One of the scenarios uses two copies of the AK map; the others use only one copy of the map or a portion of one. One scenario is an all-armor scenario; the others feature combined arms. The scenarios are a good mix of small, medium, and large in size, though none are very large. One scenario, AK77 (Chance Encounter), the one all-armor scenario, is tiny–it features three German armored cars vs. three British armored cars. Three of the scenarios feature OBA; no scenarios employ Air Support or Night rules. Typically, the SSRs are straightforward and few in number. One of the scenarios, AK79 (Before the Ghibli Comes) is a re-working of a geomorphic mapboard scenario originally designed by Philippe Leonard for ASL News. Another, AK81 (Bedja Blockade), is a re-do of a scenario originally designed by Steve Swann that appeared in Critical Hit Magazine.

One interesting scenario in the pack is AK80 (Desert Citadel), which features an Italian combined arms attack (including 13 AFVs) against the Free French; this action depicts part of the famous battle for Bir Hacheim in May 1942. AK81 (Bedja Blockade) is another French-Italian action. Set in Tunisia in late 1942, it features an Italian infantry attack, supported by tanks and armored cars, against a French force (just lately a Vichy force) of infantry and light guns. However, it depicts the French primarily as if they had British weapons, which they did not (they had French weapons, of course). 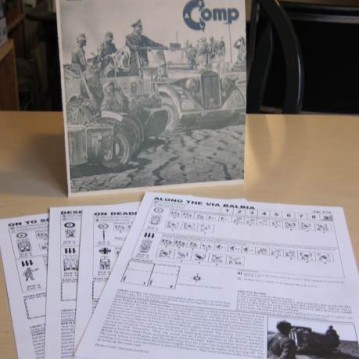