2nd Edition (The Fox Strikes Back Pack A): 8 scenarios

Afrika Korps-Benghazi Handicap (AK-BH) is a supplemental scenario pack for Afrika Korps-El Alamein, the “core” module of CH’s 6-part Afrika Korps series; see that product for project history and details.  AK-BH cannot be played without AK-EL, though this is not clearly stated on the product’s packaging.  All 8 scenarios, for example, use the “Tobruk” map that only comes with AK-EL.

The scenarios in AK-BH all take place in March-April 1941, during the early stages of Rommel’s first offensive, essentially between El Agheila and Tobruk.  They all use a large, non-geomorphic desert mapboard, usually populated with a number of overlays.

Most of the scenarios have a relatively small number of SSRs (though they all use Chapter F, of course).  There are no Night scenarios or scenarios with OBA.  One scenario uses Air Support.

Scenarios ported over to ASL from the ATS system, as all of these were, tend to be small in size, and that is definitely true for AK-BH.  In fact, all eight scenarios are small.  Most of them are so small, in fact, that it is debatable whether or not it is worth putting together a bunch of overlays and brushing up on Chapter F rules simply in order to play them.

For most ASLers, scenarios this size are so small as to not be very satisfying, although perhaps players could play several of them in a row in order to get a more rewarding total experience.  Moreover, the appeal for many of the players who do play desert scenarios (only a minority of the total ASL audience) is combined arms or armor heavy action, and these scenarios are pretty much lacking in those swirling tank battles.

Overall, it has to be said that AK-BH is disappointing.

It should be noted that, as of a month or two after the release of the 6 AK products, there has been a fair amount of errata for them.  As of mid-August 2010, as far as AK-BH is concerned, AK#13, AK#14, and AK#17 have all had their original scenario cards replaced with a 1.1 version.  Presumably the earliest released copies had the original version; players whose copy of AK-BH do not have version 1.1 cards for these scenarios should contact Critical Hit.  Players should attempt to find current errata.

2nd Edition (The Fox Strikes Back Pack A) Comments: In 2014, Critical Hit did a sort of quickie cheap release of Afrika Korps-El Alamein, replacing the original large desert map with copies of a generic desert geoboard.  It released two scenario pack conversions at the same time, dubbed A and B.  The Fox Strikes Back Pack A simply consisted of the 8 Benghazi Handicap scenarios reconfigured to be played on the geoboards rather than the original large desert map.  The Fox Strikes Back Core Pack is required to play these scenarios, just as Afrika Korps-El Alamein was required for the original.  Ostensibly, errata found in the original edition was fixed in this edition, though the map conversions have the possibility of new errata.  The pack is priced at $19.95 for 8 scenarios. 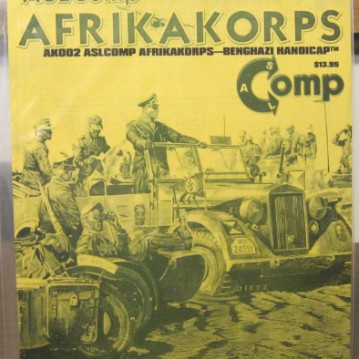