Afrika Korps-Bitter Enders (AK-BE) is a supplemental scenario pack for Afrika Korps-El Alamein, the “core” module of CH’s 6-part Afrika Korps series; see that product for project history and details.  AK-BE cannot be played without AK-EL, though this is not clearly stated on the product’s packaging.  All 8 scenarios, for example, use the “Tobruk” map that only comes with AK-EL.

The scenarios in AK-BE all take place in Tunisia between December 1942 and May 1943, during the final months of the German and Italian presence in North Afrika.  In contrast to the two earlier products in the AK series, all the scenarios in AK-BE feature Americans.   The scenarios all use a large, non-geomorphic desert mapboard, usually populated with a number of overlays.

All of the AK-BE scenarios are converted versions of scenarios originally designed for the ATS system; as such, they tend to be smaller than the typical ASL scenario.  However, there is a good mix of scenarios in AK-BE, with an essentially equal division of small, medium, and large scenarios (though no very large ones).

Several of the scenarios look fairly interesting.  One is the somewhat awkwardly titled AK#20 (Deaf Forever to the Battle’s Din), which features a struggle between American and German forces for a hill.  The Americans are well armed, with a .50 cal HMG and 3 MMGs (among other items), and get some decent armor support as reinforcements.  However, the Germans have an elite force, as well as more and better AFVs.  In addition, they are pals with a Stuka who will spend three turns over the battlefield.  There is errata in this scenario, as it says that the Germans may HIP one squad, but the Germans all enter from offboard (Critical Hit later confirmed that the Americans were meant instead).

AK#21 (Saving French Bacon) depicts an action in which an American infantry force (buttressed by two Grant tanks) must take a desert village and hold it despite some German reinforcements that include a Tiger tank.  AK#22 (Fruehlingswind) looks like a wild combined arms action featuring a German attack on an American-held village position.  Both sides have OBA.  The Americans also have a hero, some guns, and a variety of vehicles.  The Germans have a 10-2 leader, a 9-2 armor leader, and a nice armor force that includes a Tiger.  Victory conditions include CVP, building control, and hexes on an overlay.

Overall, the third AK product looks like a more enjoyable set of scenarios than the second one.

It should be noted that, as of a month or two after the release of the 6 AK products, there has been a fair amount of errata for them.  As of mid-August 2010, as far as AK-BE is concerned, AK#19 has had its original scenario cards replaced with a 1.1 version.  Presumably the earliest released copies had the original version; players whose copy of AK-BE do not have version 1.1 cards for this scenario should contact Critical Hit.  Before playing, players should attempt to get current errata. 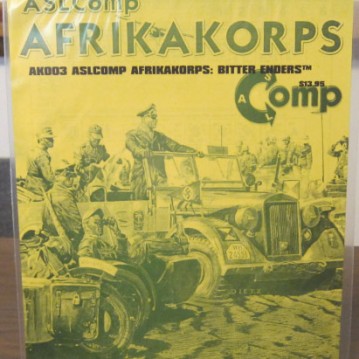