Afrika Korps-Combined Arms (AK-CA) is a supplemental scenario pack for Afrika Korps-El Alamein, the “core” module of CH’s 6-part Afrika Korps series; see that product for project history and details. AK-CA cannot be played without AK-EL, though this is not not clearly stated on the product’s packaging. All 8 scenarios, for example, use the “Tobruk” map that only comes with AK-EL.

The scenarios in AK-CA range in place and time from 1941-1943 and from Egypt to Tunisia. Where the other five packs in the AK series all have a fairly concrete common theme to their scenarios, this is not the case for AK-CA, which seems to be more of a grab bag of scenarios than anything else. The scenarios are not always even “combined arms,” in the sense that most ASLers think of the term, i.e., as a mixture of infantry and armor, perhaps with artillery support or air power. One scenario, for example, AK#49 (Codeword: Laxative), is an all-armor scenario–the exact opposite of combined arms. Essentially, these scenarios seem “left over” from the other packs.

The scenarios feature Germans, Italians, French, British/Commonwealth, and Americans. The scenarios all use a large, non-geomorphic desert mapboard (included with AK-El Alamein), usually populated with a number of overlays.

All of the AK-CA scenarios are converted versions of scenarios originally designed for the ATS system; as such, they tend to be smaller than the typical ASL scenario. Most of the scenarios are thus small, with a couple that are barely medium-sized and one that is large. A couple of the scenarios are of the “why even bother” variety, including AK#49 (Codeword: Laxative), which pits 5 Italian AFVs against 5 British AFVs and AK#50 (Gunlayer Halm), which features 6 British AFVs ranged against 2 German AVs and 2 76mm AT guns.

Typically, the scenarios have few SSRs. Aside from the Desert rules themselves, they don’t often use advanced ASL rules sections. However, three scenarios do use OBA (though none use Night rules or Air Support).

The large scenario in AK-CA, AK#43 (Head On at Alam Halfa), features the famous German attack on Alam Halfa ridge during the battle of El Alamein. The Germans, supported by 4 on-board guns and a module of 150mm OBA (!), attack with 14 elite squads (extremely well led, and with a hero, too) and 18 AFVs. The British have 8 squads (also pretty well led), 8 SW, 8 Guns, and 6 AFVs. The scenario is a full 10 turns long.

Overall, however, the scenario selection is not great and this pack is one of the more disappointing ones (along with AK-Benghazi Handicap) in the series.

It should be noted that, as of a month or two after the release of the 6 AK products, there has been a fair amount of errata for them.  Before playing, attempt to get latest errata. 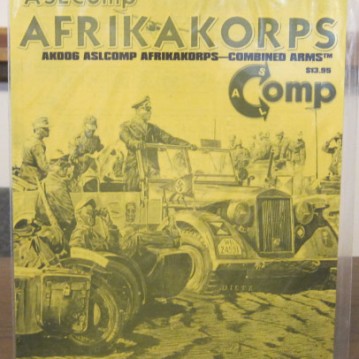