AK-EGS has the loose theme that its scenarios are set in Tunisia in 1942-1943, with one odd exception–a reworking of a previously designed scenario by Rick Troha set in Sicily. That’s stretching quite a bit; perhaps it was just thrown in so that the AK series could reach a total 100 scenarios. Nationalities included are the British/Commonwealth, Americans, Italians, and Germans.

All of the scenarios take place on a single AK map, or a portion of one. They are overwhelmingly small in size; the only one of any real size is the misplaced Sicily scenario, AK95 (The Gauntlet). Four of the scenarios have all-armor OBs for at least one side. Two scenarios use OBA; one scenario uses the Night rules. Some of the scenarios are just too small to be any fun. AK94 (Lancers Alone), for example, features 5 British tanks and an armor leader against two German guns and a leader (who won’t have much to do except be a cheerleader for the crews). To win, the British simply have to exit an AFV. It is hard to see how it is worth setting up the 7 overlays required to play this small and rather pointless scenario.

A more interesting scenario is AK92 (First Clash), a meeting engagement between British and German troops. Both sides enter from off-board on trucks and must contend for building and hill control VP. The British have a largely elite force, reasonably well led, with excellent support weapons (3 HMG, 2 LMG, 1 51mm MTR) and OBA. They are accompanied by a carrier and two armored cars. The Germans are also elite, including 7 8-3-8 squads and 2 5-4-8 squads, but that short range might be a liability. They have excellent leadership (10-3, 9-1, 8-1, and a hero), and good support weapons (1 MMG, 4 LMG, 1 ATR, 3 DC). They get three Pz IVF2s as reinforcements (with an armor leader) as well as a truck carrying a 20mm AA gun. 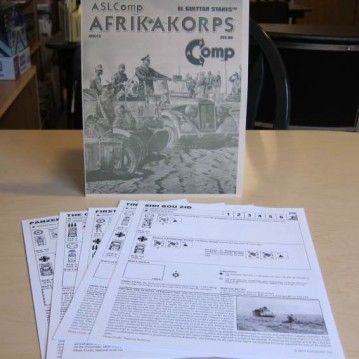