Afrika Korps-Frontier War (AK-FW) is the 8th in Critical Hit’s Afrika Korps 12-part series of scenario packs, all of them converted from its ATS tactical game system. Ownership of both Afrika Korps-El Alamein and Afrika Korps-Battle of Gazala is required to play the scenarios in this pack; thus it costs $144 to play a single scenario in this pack.

The scenarios in this pack are all set on the Libyan-Egyptian border and take place between June 1940, when Italy declared war on Britain and France, and December 1940, when the “O’Connor Offensive” (Operation Compass) swept the Italians out of Egypt and eastern Libya. This is thus a rare set of scenarios that focus on British-Italian actions, which is a welcome break from the usual fare. One scenario uses two copies of the AK map; the remaining 7 are set on a single map, or a portion of one.

Check for current errata before playing. 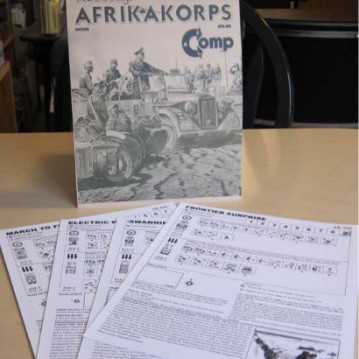