Afrika Korps-Operation Torch (AK-OT) is a supplemental scenario pack for Afrika Korps-El Alamein, the “core” module of CH’s 6-part Afrika Korps series; see that product for project history and details. AK-OT cannot be played without AK-EL, though this is not clearly stated on the product’s packaging. All 8 scenarios, for example, use the “Tobruk” map that only comes with AK-EL.

The scenarios in AK-OT all take place between November 1942 and February 1943 in Morocco and Tunisia, the early months of Operation Torch. The scenarios feature, in addition to the Germans and Italians, the Americans and the French. Indeed, the French appear in all 8 of the scenarios, either in their Vichy variety (i.e., defending against the Americans) or in their new-found Free French status (i.e., fighting against the Axis). The scenarios all use a large, non-geomorphic desert mapboard (included with AK-El Alamein), usually populated with a number of overlays.

All of the AK-OT scenarios are converted versions of scenarios originally designed for the ATS system; as such, they tend to be smaller than the typical ASL scenario. However, in contrast to some of the other packs of the 6-part AK series, AK-OT does include some meatier scenarios. Five of the scenarios are small in size, while three are large (none are really medium-sized). Generally, the scenarios have few SSRs. Three of the scenarios feature OBA; one scenario uses Air Support. There are no Night scenarios.

Several scenarios are worth mentioning. AK#35 (Toasted in Tunis) features a German attack on several hills (attacks on hills are a common feature in AK scenarios) occupied by American and French defenders. The Americans and French are loaded for bear (the American OB includes a .50 cal HMG, 4 MMGs, 3 60mm MRs, 2 Bazookas and 2 37mm AT guns, while the French OB includes an HMG, 3 LMG, and 2 60mm MTRs. The German attackers are actually considerably outnumbered in squads and leaders (in fact they only have two leaders, but what leaders! A 10-2 and a 9-2, with a hero tagging along for good luck), but they are well armed, often elite, and have a bit of armored support, in the form of 11 AFVs. Those AFVs include 2 OP tanks, each of which can bring down a module of OBA. This looks like a very interesting meaty scenario.

Another one of the meaty scenarios features an American attack on a French-held airfield (represented by track overlays); the Americans have to prevent the French from being able to apply 24FP onto any airfield hex. This scenario is only for artillery lovers; the Americans have two OBA modules (81mm and 120mm), while the French have a module of their on (105mm). The American attackers include 23 squads (1st and 2nd line), with 2 heroes, 2 9-2 leaders, a .50 cal HMG and several other toys, as well as 4 AFVs. The French defenders have 16 squads (Elite and 1st Line) well armed with support weapons (including 2 HMG) and with 4 Guns.

An interesting smaller scenario is the awfully titled AK#39 (Faid Fadeaway), which features a small German elite (in almost every possible way) combined armed force attacking a motley French-held set of buildings. The French must make every one of their units count.

It should be noted that, as of a month or two after the release of the 6 AK products, there has been a fair amount of errata for them. As of mid-August 2010, as far as AK-OT is concerned, AK#35, AK#36, AK#37, AK#39, AK#41 and AK#42 have all had their original scenario cards replaced with a 1.1 version. Presumably the earliest released copies had the original version; players whose copy of AK-OT do not have version 1.1 cards for these scenarios should contact Critical Hit. Before playing, try to get the latest errata. 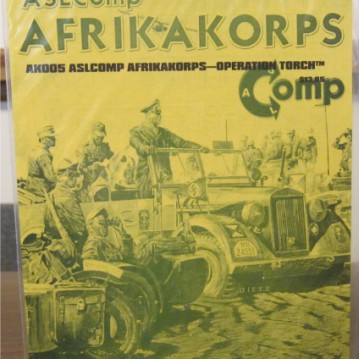