Afrika Korps-Reluctant Offensive (AK-RO) is the 9th in Critical Hit’s Afrika Korps 12-part series of scenario packs, all of them converted from its ATS tactical game system. Ownership of both Afrika Korps-El Alamein and Afrika Korps-Battle of Gazala is required to play the scenarios in this pack; thus it costs $144 to play a single scenario in this pack.

The scenarios in this oddly-titled pack are set in December 1940-January 1941 as Operation Compass, the British/Commonwealth offensive, swept the Italians out of Egypt and back across Cyrenaica all the way to El Agheila. In other words, this depicts the period in the western desert fighting just before the arrival of the Germans.

All of the scenarios use one AK map or a portion of one. They are a fairly even mix of small, medium and large actions. Half of them feature all-armor OBs for at least one side. Three of the scenarios have OBA. There are no scenarios that use the Night or Air Support rules. Generally speaking, the scenarios in AK-RO have few SSRs.

Several of the scenarios depict interesting actions. AK68 (Sidi Barrani) features a combined arms British attack on an Italian-held village. AK70 (Ciao Time!) depicts a British attack on an Italian trench position. Initially it is basically an infantry action, but armor arrives for both sides. AK75 (Fox Killed in the Open) is the only Italian attack in the pack; it features a large Italian armored force trying to get past a smaller but better (and extremely well led) British armored force. The Italians must both eliminate British AFVs as well as exit AFVs of their own. 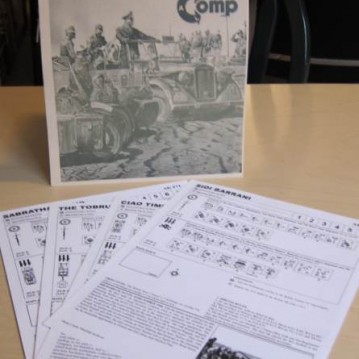