AFV Logic Basic Plus:  All of above, plus carrying case

AFV Logic is one of the more unusual ASL products ever produced.  In essence, it is a new form of AFV card of the type that appeared in Avalon Hill’s DASL modules Streets of Fire and Hedgerow Hell.

The first (and final) AFV Logic set contains AFV cards for 50 different types of German, Soviet, British, and American AFVs (with 6 duplicate cards for each AFV, and A-F alphabet stickers to put on the cards to differentiate them).

Each card is two-sided and full-color.  They are business-card sized.  This makes them more convenient to carry or store, but less convenient to use, as only half of the needed information is printed on each side of the card, requiring fairly frequent flipping.  Data on the cards include armor values, movement values, gun and machine gun values (oddly, on different sides of the card), weight, crew survival, smoke dispenser info, vehicle note references, and specialized To Hit and To Kill information.  Not all of it is intuitive and there is no guide provided–and one is clearly needed.  There is some clarifying information on the Countersmith Workshop website.

What makes the AFV Logic cards different from other AFV cards is that instead of using counters on the cards to represent things like loss of special ammo, AFV Logic uses transparent plastic overlays to provide this information.

Thus the full set includes a large number of tiny plastic sheets, each of which is transparent except for a single information graphic such as “MA Malfunction” or “BOG” or “BU” or “SHOCK.”  Each of these items is located on the transparent sheet in a specific location so that, laid over the corresponding AFV card, it relates to the information on the card.  For example, the “BOG” graphic would appear right above the movement value of the AFV.  A “Depleted” graphic would appear over the special ammo section.

Because the cards are otherwise transparent, essentially an endless number of such cards can overlay an AFV card.  There is nothing to keep such overlays on a card, though, unless players use a paper clip or some other device; otherwise, a simple brush of the hand might scatter a stack of overlays.  Though interesting looking, it is not clear that this overlay method has any practical value over AFV cards that use counters.

The main problem that this product has is that it really doesn’t have much of an audience.  In his ASL travels, this author tends to see AFV cards in use by ASL players perhaps once every two years or so.  The past history of AFV cards suggests that they are used primarily by novice players, who discard them relatively quickly, as they really do not provide that much added value.  They take up space, are fairly cumbersome, and most players do just fine without them.  Because of this, it is not really clear how many people would truly be attracted to this system.  It is expensive, coming from Hong Kong, but also obscure, for much the same reason, which means that many novice players will not ever even hear about this product, unless they read about it right here.  ASL completists might well get it, because they tend to get everything ASL-related, but even they are unlikely to actually use it, as opposed to simply hoarding it.

Countersmith Workshop deserves considerable credit for ingenuity, and for trying new things, but this particular type of product is probably not the best use of their resources. 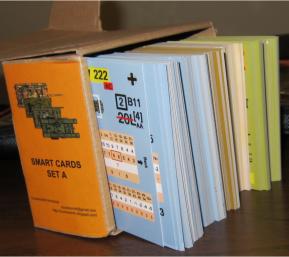