All American: Shanley’s Hill (AASH) is the third of a three-part series, designed by Ian Daglish, that depicts the actions of the 82nd Airborne Division in Normandy on and shortly after D-Day.  It features two historical maps (arrayed in an L-shaped configuration) which do not mate with the maps in the other two AA games.  Unfortunately, the maps do not use the same style of artwork as in the previous two modules; instead, they have a new look, ostensibly meant to de-emphasize the hexgrid by coloring it gray.  In practice, this just makes the map look strange (this style also appeared in Ordeal Before Shuri before it thankfully disappeared).

Ten scenarios grace AASH (using a layout different from both of its predecessors).  Whereas the previous two AA modules had scenarios that tended towards the small, the scenarios in AASH tend towards the really small, including one which features 5 half squads fighting it out with one enemy squad and 6 half squad companions.  The small size of a number of these scenarios, combined with their infantry-only nature and a lack of complex special rules, means that this is actually a historical module that could be used to entice and teach beginning ASLers.

Additionally, a “Behind Utah Beach” campaign (of sorts) is provided.  This is not a Platoon Leader campaign game, nor really a campaign game in the sense typically thought of in ASL, but rather a simple way to play multiple scenarios from the three AA modules to gain “Campaign Victory Points” to determine the overall winner.

Also “of sorts” are the variant counters provided.  The counters are unmounted counters drawn on the inside cover of the module, meaning players have to cut up their module and glue the counters together.  Few players will want to do this.  Luckily, none of the counters are required to play the game; indeed, most of the counters are entirely superfluous (duplicating existing counters).  The exceptions are BAR and BAR gunner counters; there is an optional rule that lets American squads deploy into two half-squads and an SMC BAR gunner.  The rule is considered “experimental,” which means that they are partially written out and players are enjoined to “use your common sense for the rest.”  Few players are likely to try (a fully worked out version of the rule appeared with mounted counters in Pointe Du Hoc not long afterwards, but did not prove popular).

2nd Edition (Behind Utah Beach: The Battles for Hill 30 and Chef Du Pont) Comments: Many years after the original publication of Shanley’s Hill, Critical Hit released a new, second edition in 2014, dubbed Behind Utah Beach (BUB).  One wonders how popular this module originally was, if it took so long to get a second edition (Critical Hit seems to release new editions of some of their products every other Tuesday).  But Shanley’s Hill was one of the Critical Hit products that certainly could have used a facelift.

BUB comes with two pages of rules, which do little more than clarify what terrain is what and lay out the linked-scenario “campaign game.”  It also comes with two small countersheet, one of which contains American paratrooper counters and SW, while the second contains 5/8″ counters, mostly a miscellany of German and American vehicles and guns.  All of the counters seem to duplicate official ASL counters and are thus not necessary for play of this product.  There is one exception to this:  five of the counters represent German rail-car counters that are used in one scenario, AA19 (Gavin’s Train).

The module comes with the same 10 scenarios as the original, each marked “ver. 1.1.”  The scenario cards now have a splash of color on them and look nicer than older Critical Hit scenario cards.

The maps are also very different, physically, from the originals.  The map is formed by mating 5 12″ x 18″ heavy paper/light cardstock map panels (about the thickness of a sheet of official overlays).  The glossy map panels slightly overlap and players have to fit them together to form the playing area.  This can sometime be fiddly and irritating to have to do, especially as there are five panels (basically, configurations above 4 panels get progressively more irritating).  Also irritating is the glossy finish, which can produce a substantial reflective glare at times.  However, on the up side, the map panels are brighter and more colorful than older Critical Hit maps.

This product, in whatever edition, is only okay.  Its linked scenario campaign game is weak, and the scenario themselves are small and insubstantial.  Normandy and airborne fanatics are certainly likely to want it, but others may wish to be more careful.  Also of consideration is the extravagantly high price:  charging $59.95 for BUB may be pricing it well beyond its actual value range. 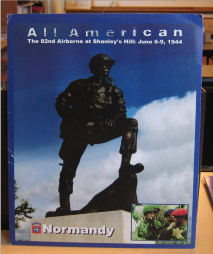