This Platoon Leader campaign game, designed by Mark Porterfield, features combat between the U.S. 25th Infantry Division and 716th Tank Battalion and the Japanese 2nd Tank Division on the island of Luzon in the Philippines in January 1945.

The game uses portions of 6 geomorphic mapboards (2, 33, 20, 23, 19, 43, 10, 40). There are two campaign games included, one with 6 campaign dates and one with 14 campaign dates–fairly hefty in size. Its main attractiveness is the prevalence of U.S. and Japanese armor–a fairly rare occurrence.

Considering, though, that the product just consists of a few sheets of paper, many may not find it worth the price of obtaining it.  However, PTO campaign games are relatively rare.

2nd Edition (Armored Stand 2014 Edition) Comments:  In 2014, Critical Hit re-released all of its stand-alone Platoon Leader campaign games, replacing one of the boards used in the product with an included new geoboard.  Armored Stand was one of these.  Armored Stand comes with 6 pages of loose-leaf rules (punched for inclusion in three-ring binders), which are printed in color using new printing equipment and which look far more attractive and professional than Critical Hit’s older rulebooks.  However, somehow the rules make no mention at all of the product’s other components or how they are supposed to be used.

One of these components is a sheet of 4 overlays.  Each overlay is printed with a number on it, which seems to be a board reference, so one assumes that the player should place these overlays, which do contain hex numbers, directly on top of the appropriate part of the hex grid of the board (20 or 23) corresponding to the number on the overlay.

The other component is a geoboard, s10.  Though the rules never say this, this geoboard is intended to replace board 10, which is the board that is mentioned in the rules.  It is not clear if the overlays required to go on board 10 are also required to go on board s10, but it seems a reasonable assumption, as the s10 terrain would otherwise be quite different.

Unfortunately, s10 is a very inferior geoboard, both physically and graphically.  Physically, the board is neither a mounted board nor an ASLSK-style cardboard unmounted board.  Rather, it is printed on heavy paper/light cardstock (equivalent in thickness to a sheet of official overlays), which is flimsy and cheap in comparison.  Moreover, the board is printed on 2 9″ x 12″ sheets with a white trim, which means the two board halves must be cut out of the sheet with scissors or a rotary trimmer, just as if they were large overlays.

If this weren’t enough, the board is not the correct dimensions.  ASL boards are 8″ from side to side, but this board is 1/8″ short of that.  That doesn’t sound like much, but it is more than enough to make sure that the board will not align correctly along this axis with any other board.  In some of Critical Hit’s other products printed at the same time with this same problem, it doesn’t matter so much, because the board is not required to mate up along that axis.  However, in Armored Stand, the board does, in fact, mate up with another board, but won’t be able to do so correctly.

Luckily, players have a clear “fix” to this problem, which is to ignore the board (with which there was almost certainly no playtesting) and use board 10 as the designer originally intended.

Another reason to eschew s10 is because the building graphics are screwed up.  Basically, if a building on the map has an exact vertical or horizontal orientation, it is fine.  However, any building oriented at an angle has its graphic depiction messed up.  These buildings appear as pixelated/jagged, noticeably different than the other buildings on the map, and look ugly and crude.  Most of the buildings on board s10 are angled, with the result that almost all of the buildings on the board look as if they were printed at a low resolution.

Given that Armored Stand 2014 costs $19.95, ASLers are well-advised to seek out older copies of the product instead. 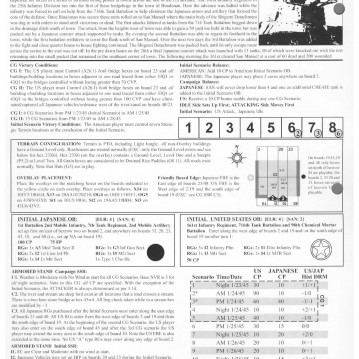