In 2015, to commemorate the 30th anniversary of ASL, Battleschool released two 2-dice commemorative sets of custom precision dice (four dice in all).  One set of two had a Soviet theme, while the second set–this set–had dice with a German theme.

The dice are 5/8″ (16mm) ball-cornered custom precision dice.  The first die is white, with black pips.  Instead of a normal 1-facing, the die contains the iconic German soldier depicted on the box cover of the original Squad Leader and later incorporated into the design of the cover of the ASL rulebook.  On the 6-facing, in addition to a half-dozen pips, the die also features the dates 1985-2015, though the text is thick and hard to read.

The second die is a black die with the 1-facing depicting a silver-foil Iron Cross symbol.  The 2- and 3- facings have normal pips, but also small silver-foil ROF symbols, to help players better remember ROF.

Unfortunately, the second die ruins the set, because the version of the Iron Cross that is included on the die is the Nazi version. Though the Iron Cross itself is a German military symbol that dates back a long time, during the Nazi regime, the design of the cross was altered in 1939 to include a swastika right in the center of the cross.  As a result, this version of the Iron Cross symbol has become a well-known hate symbol, used by neo-Nazis and white supremacists all around the world.  It is unclear why Battleschool would choose to release this offensive version of the symbol, when the Iron Cross without the swastika is innocuous.  Battleschool could also have chosen some other symbol such as the German Military Cross.

Many ASLers–including this one–are not going to want to roll a die that has a swastika on it.  This was a very unfortunate decision. 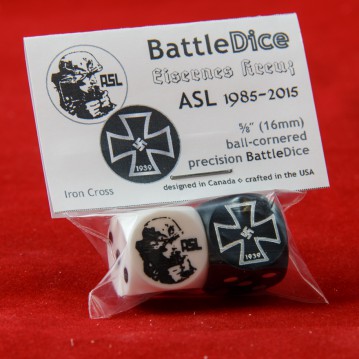