Contents:
64-page magazine with 15 ASL scenarios included as pages of the magazine.

In 1989, with the audience for ASL growing ever larger, and the clamor for new materials ever greater, Avalon Hill decided to launch an annual compendium of ASL material, both to satisfy the demand and to insure that ASL material would not swamp the pages of its house magazine, The General, thus irritating non-ASL players (those bastards).  The result was the ASL Annual.  Its first issue, Annual ’89, hadn’t quite found its groove.  Despite the title, it contained material for both Squad Leader and Advanced Squad Leader, and a couple of the articles were reprints rather than original content.  However, the Annual eventualy became an exclusively ASL publication that concentrated on original content–both articles and scenarios.

The ASL Annuals–for the most part–were of high quality, with good articles combined with strong scenarios. Some of the issues are definitely stronger than others, but all had at least some good scenarios.  The article content was more uneven, but this was not the fault of Avalon Hill–good writers who are also very knowledgeable about ASL are simply hard to find.  In general, the quality of writing in the Annuals was better than that in any other ASL publication at the time.

The final two Annuals, ’96 and ’97, were produced by MMP under the auspices of Avalon Hill, and this is immediately obvious; these issues strongly resemble MMP’s old magazine Backblast in substance and style, but with higher production values.

Altogether, eight ASL Annuals were published, one for each year except 1993 (which saw two) and 1994 (which saw none).  Some ASLers produced a satirical “ASL Manual 98” in 1998, featuring Mad Magazine’s Alfred E. Neuman on the cover and a scenario featuring Godzilla, full of in-jokes for hardcore ASLers.

ASL Annual ’89 debuted as a 64-page full-color magazine with high production values.   The articles are not particularly interesting, and some of them are absolutely worthless. The most notorious article, though, “One-Half FP:  The Incremental IFT Variant,” introduced the controversial IIFT, which would spark many an argument over next quarter-century and beyond.

One tiny item in the Annual is unintentionally fascinating today.  This is the “Chronology of War,” a listing of every single official scenario published to date.  The total:  117.   Given that the “third party” ASL industry was in its bare infancy at this time, with only a relative few scenarios produced, the total of official and non-official scenarios was almost certainly less than 200 at the time.  To give you an idea of how much the hobby has grown, the most recent issuing of the player-maintained “Chronology of War” spreadsheet, from 2013, listed nearly 6,700 official and unofficial ASL scenarios.  A number of those are repeats, or scenarios never truly finished or published, but even taking that into account, there would probably be more than 5,000 viable scenarios available in 2014.

Scenario A1 (Tavronitis Bridge) is a Glider scenario, as are A2 (Bofors Bashing) and A3 (Descent into Hell).  All of the scenarios are Crete 1941 scenarios set near the Maleme airfield.  DASL A1 (L’Ecole Normale) is a DASL scenario, as is DASL A2 (Last Act in Lorraine) and DASL A3 (Back to School).

Generally speaking, the ’89 scenarios are not as balanced as one would wish for, with a few real dogs thrown in.  Although some of the scenarios are fun to play, no scenario in this Annual really became a classic in the way that many in future Annuals would.  It should be noted that the scenarios in Annual ’89 (and, in fact, in all but the last few Annuals) reflect the state of scenario design at the time, which strongly gravitated to fairly large and extremely long scenarios.  The scenarios in ’89 have lengths of 5.5, 7, 8.5, 7, 10, 10, 9, 7, 12, 6, 9, 7, 4.5, 14, 6, and 10 turns.  In “modern” times (i.e., 2014), scenarios with 7 turns are considered to be beginning to be on the long side and scenarios with 10 or more turns are very rare indeed.

All in all, not one of the better Annuals, but a sign of better things to come. 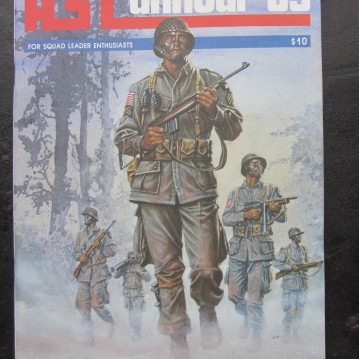