In 1989, Avalon Hill debuted an annual magazine devoted to ASL content, dubbed (not particularly imaginatively) the ASL Annual ’89.  Annual ’89 quickly sold out of its initial print run of 10,000 copies, then sold out of a second, smaller print run of several more thousand copies.  With that ringing endorsement from the ASL community, the Annual was here to stay and in 1990 its second iteration appeared, the ASL Annual ’90.

Like its predecessor, it was a 64-page magazine full of content and scenarios, and like the first Annual, Annual ’90 was not exclusively ASL but did contain a few scenarios for the original Squad Leader system.

As with Annual ’89, the 1990 Annual had generally poor article content, with few articles concentrating on game play.  Instead, there are several “historical” articles (which typically have little worth and are not often written by experts), with a “joke” article thrown in (but funny to no one).

However, there are exceptions, the chief one being a major Series Replay by Mark Nixon, Bill Sisler, and Dave Sisler.  In addition, Jim Stahler provides a “programmed instruction” article to help people learn ASL.  Your humble narrator does not care for this article, but a number of people recommend it to others, so it has some support.

The content most people care most about is the scenario content.  Annual ’90 provides 3 DASL scenarios and 13 ASL scenarios, including one of the great all-time classic scenarios, A25 (Cold Crocodiles).  Several other scenarios are worthy, including A17 (The Penetration of Rostov), A19 (Cat and Mouse), and A15 (Stand fast the Guards).  But the ’90 has about five or six barking dogs in it as well.  However, your humble narrator’s opinion has evolved to believe that some dogs are inevitable and what really matters is whether or not there is a core group of fun and balanced scenarios in a pack or product–on that score, Annual ’90 holds up okay.

The DASL scenarios include DASL A4 (The Island), DASL A5 (Intimate War), and DASL A6 (Breakout). A20 (Counterattack at Sidi Bou Zid) is a desert scenario. 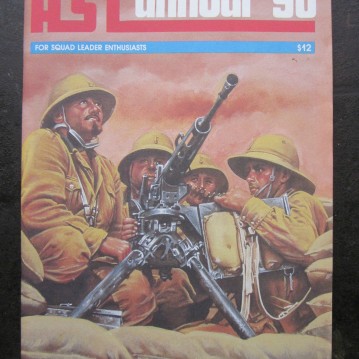