Contents:
80-page magazine, with 15 scenarios included as pages of the magazine

ASL Annual ’92, the fourth in Avalon Hill’s series of yearly magazines devoted to ASL, is also the second-longest of the magazine’s nine issues.

Despite its length, the article content is not very good, with much of it devoted to “historical” material rather than to gameplay material.  Worth mentioning, though, is a Series Replay of A41 (OP Hill), a scenario that itself appears in this issue.  Unfortunately, a great deal of space is taken up by a “commando campaign game” for the long-since-obsolete Squad Leader.

The 15 scenarios include another Red Barricades scenario, HASL A2 (The Commissar’s House), as well as 2 DASL scenarios:  DASL A9 (Royal Marines) and DASL A10 (The Tiger of Toungoo).  A39 (Showdown at Tug Argan Pass) is a desert scenario, as is A50 (…And Here We Damned Well Stay).

None of the scenarios in Annual ’92 are classics; indeed, the majority of scenarios in the magazine are unfortunately unbalanced.  However, DASL A9 (Royal Marines) and A39 (Showdown at Tug Argan Pass) are worth trying. 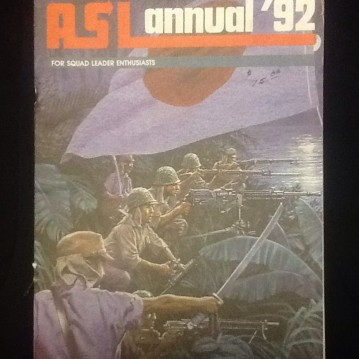