Contents:
48-page magazine, with 11 scenarios included as pages of the magazine

In 1993, Avalon Hill announced that it would henceforth publish not one, but two ASL “annuals” per year, beginning with unimaginatively titled ASL Annual ’93a.  With this, the Annual greatly shrank in size from 80 pages in Annual ’92 to only 48 in Annual ’93a, as well as an accompanying, though less drastic, drop in the number of scenarios.  In the end, Avalon Hill managed to do this for exactly one year before completely falling apart and producing no Annuals at all the following year, then picking up again in 1995 with one Annual released per year.

The article content finally includes some more gameplay articles for ASL, including an article on tank vs. tank combat in ASL by Bruce Bakken and a look at bypass movement by Philippe Léonard, but there’s some crap in there as well.

The 11 scenarios include a DASL scenario, DASL A11 (Italian Midnight).  They also include reprints of three scenarios that originally appeared elsewhere,  marking the first time that third party materials made their way into “official” ASL.  These include the two most noteworthy scenarios in the issue, A60 (Totsugeki!) and A59 (Death at Carentan), which appeared in the ASL Digest, more or less an irregular 1990s e-mail newsletter.  A51 (Clash along the Psel) uses desert boards for a Steppe terrain scenario at Kursk, while A56 (A Good Party) is a true desert scenario.  A55 (The Cat Has Jumped) features a rare Japanese seaborne assault.

The worthwhile scenario content makes this issue worth acquiring. 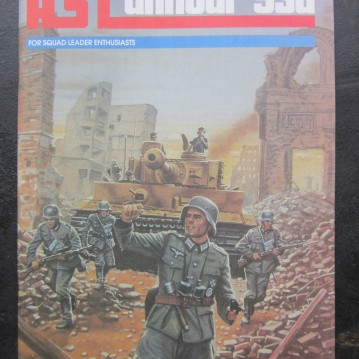