ASL Annual ’93b was the second “annual” to come out in 1993 as part of Avalon Hill’s plan to produce two Annuals per year–a plan that lasted for exactly one year before collapsing in failure.

The article content in this short magazine is poor, except for that devoted to the special feature in the issue, an entire mini-HASL on the invasions in August 1942 by the USMC of two small islands, Gavutu and Tanambogo, as part of the larger Guadalcanal landings.   Because the islands are in fact quite tiny, designer Dan Dolan was able to use custom overlays, in combination with the ocean overlays that came with Gung Ho, to recreate the battlefield without needing to create a whole map (though when G-T was reprinted, as part of Rising Sun, in 2013, a map was indeed created and included).

The G-T campaign game includes rules in the magazine (not formatted here as official rules pages, though they would be included as such in the reprint as Chapter Z pages), as well as several scenarios:  HASL A3 (Grabbing Gavutu), HASL A4 (Tanambogo Nightmare), and HASL A5 (Take Two).

Of the other scenarios included, A61 (Across the Wire) is a desert scenario, while DASL A12 (Tussle at Thomashof) is a DASL scenario.

One scenario is worth mentioning and that is A62 (Paole Zion), which purports to be representing an armed conflict between Jewish resistance fighters and German troops in the Warsaw Ghetto on February 20, 1943.  The inclusion of such a scenario is pretty disgraceful.  First, it should be noted that whatever this is, it is quite inaccurate.  No such action as described seems to have taken place on February 20, 1943; the designer may possibly have been referring to an incident that occurred on April 20, 1943, which fits some of the particulars.  However, the Jewish resistance fighters in this scenario are greatly over-armed (compared to the reality in the Ghetto), while whatever action that occurred on April 20 was by no means the heavy combat described here.  One reason for this is that the Warsaw Ghetto Uprising was a symbolic uprising, a chance for Jews in the ghetto to decide the way in which they were going to die.  Actual combat was rare after the first day of the uprising, largely because the resistance fighters had no means.  Instead, they holed up in makeshift bunkers and the Germans ruthlessly rooted them out in succeeding days and weeks.  It seems in poor taste, at best, for an ASL scenario designer to change facts to make a “fair fight” out of a campaign of extermination, solely for game purposes, but it seems in even worse taste to try to make a game out of any element of the Holocaust.  This is a scenario that never should have been designed.

The scenarios in Annual ’93b are not well-played or particularly popular, nor do any have reputations as classics.  However, A66 (Counterstroke at Stonne) and A63 (Action at Balberkamp) are solid scenarios, the latter suitable for three players (2-on-1).

Overall, this issue will most appeal to PTO and USMC fans (but remember that there is a better version of G-T in Rising Sun). 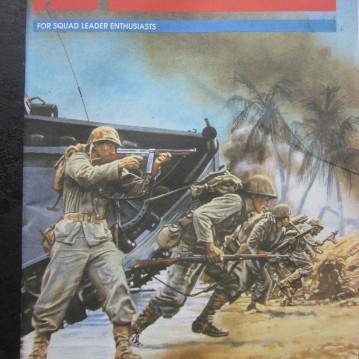