ASL Annual ’95 was the seventh in Avalon Hill’s series of annual publications devoted to ASL.  The previous issues were Annuals ’93a and ’93b, part of an attempt by Avalon Hill to increase production to two (smaller) Annuals per year.  This lasted for one year before ending in inglorious failure and in fact not only were there not two Annuals in 1994, there was not even a single Annual in 1994.

The Annuals thus picked up again with ’95.  Depending on whom one talks to, Annual ’95 is either the best annual ever published or the worst; opinions have been rather polarized.  It is easy to see why.  On the one hand, Annual ’95 was sloppily composed–it is full of errata, including an entire sheet of DASL overlays that are useless because they are the wrong size.  On the other hand, this issue contains probably the highest proportion of good and/or classic ASL scenarios of any of the Annuals.

On the third hand, many of those scenarios were not original scenarios but reprints of scenarios first published in third party publications–which is to say that many ASL grognards already had them, though not the wider ASL world.  But on the fourth hand, the article content is strong and the issue is the longest of all the ASL Annuals.  These sorts of controversies were typical of Gary Fortenberry’s relatively brief reign at the helm of ASL before Avalon Hill brought MMP in to handle the series.

Good articles include a “crossfire” analysis by Robert Banozic and Mark Nixon, an article on routing by Steve Tinsley, and a Kampfgruppe Peiper I series replay.  There are, however, the usual not-very-useful or reliable “historical” articles as well.

ASLers should remember to make sure they have any errata before playing any of the scenarios in this issue, as a good many scenarios do have some form of errata or another.

A72 (Italian Brothers) takes place in the Spanish Civil War, with Italians on both sides.  A84 (Endless Struggle) takes place after the end of the war, in 1946, as Ukrainian nationalist partisans resisted the re-imposition of Soviet rule.  A76 (Night Drop) is an Air Drop, while A85 (Airborne Samurai) is a rare Japanese airdrop.  A79 (Mike Red) is a Canadian Seaborne Assault.  A90 (Cutting Out a Strongpoint) is a desert scenario.  DASL A13 (The Mailed Fist) is a DASL scenario.

Annual ’95 contains no fewer than four genuine classic scenarios:  A68 (Acts of Defiance), A69 (Broich Bash), A70 (Wintergewitter), and A80 (Commando Schenke).  In addition, it has a number of other very solid scenarios, including A71 (Patton’s Prayers), A72 (Italian Brothers), A74 (Valhalla Bound), A82 (Orange at Walawbum), A88 (Surprise Encounter), and A89 (First Day at Diadem).  The scenario mix begins to mark a transition away from the large and long paradigm of the early ASL years into something looking a bit more modern.  The scenario situations include a pleasing mix of familiar and exotic situations.

ASL Annual ’95 does contain some one-hex overlays for DASL boards, but they were printed at the wrong size.  Because of this, they aren’t very useful, unless players want to enlarge them on their own with color copies, so they aren’t included in the tag “Official Overlays.”  However, the corrected overlays were printed in an issue of The General and are available for download from MMP.

Despite the errata, the tremendous scenario strength in this issue makes it well worth getting. 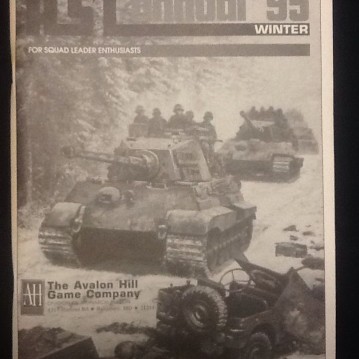