Always a step or two behind the times when it came to computer games, Avalon Hill released a crude game assistance program (GAP) for ASL in 1988.  This program, designed for the Apple II, presumed that people would play ASL next to a bulky 1980s desktop computer and would repeatedly stop play to use the computer to add up modifiers and in other ways “help” the players.  It was subsequently released as a DOS program for IBM compatibles.  In this format, it can still occasionally be found on E-bay (probably mostly in pirated versions).  Supposedly, it was also released for the Commodore 64.

Over the years, many players created their own homegrown software programs designed to help them with ASL.  However, other than VASL (Virtual ASL), which became a worldwide phenomenon, none of them were popular or widely distributed. 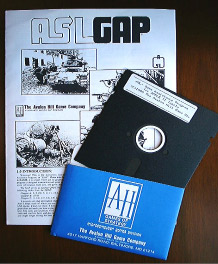