Contents:
48-page magazine, including 12 scenarios as pages of the magazine

Featuring another strong Ken Smith cover, ASL Journal Issue Five (J5) improved in article content, with a greater emphasis on gameplay, including a detailed article on close-in jungle tactics by Mark Pitcavage and an analysis of the campaign game in Operation Veritable by Oliver Giancola. There is also a short article by Ian Daglish that is useful in understanding the status of crews and MMCs in OT and CT AFVs under different circumstances.

There are no bonus materials in J5; it is just articles and scenarios.  The one quasi-exception is an article by Pete Shelling for linking three desert scenarios contained within into a campaign game of sorts dubbed “A Line in the Sand.”  The scenarios are J79 (Rommel’s Remedy), J80 (Egypt’s Last Hope) and J81 (Twisted Knickers).

The 12 scenarios include actions set in:

The scenarios in J5 have not gotten as much play as have those in many other issues of the Journal.  Perhaps the best scenario is J84 (Makin Taken), a nice little PTO action.  Also worth looking at are J88 (Escape to Wiltz) and J89 (Himmler’s House).  Unfortunately, some of the scenarios in J5 are not as balanced as one would wish.  This really doesn’t matter if a product has some really great scenarios to compensate, but the scenarios in J5 are, overall, just not that exciting.

Overall, J5 was a bit disappointing. 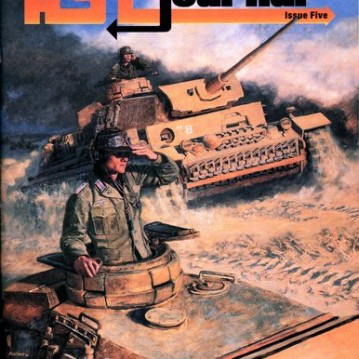