ASL Journal Issue Four (J4) can immediately be seen as a stark departure from its predecessors.  On the plus side, an attractive Ken Smith painting graces the cover instead of a graceless David Pentland effort.  On the negative side, just as visible is the fact that J4 is noticeably thinner than its predecessors, only slightly longer than half the length of Issue Three.  From this point on, almost all issues of the ASL Journal would be only 48 pages long–including the scenario pages.

While it surely must have been more manageable for MMP to have “lighter” Journals, there is nothing like having a thick juicy ASL magazine brimming with content.  J4 seems much less substantial, an impression bolstered by the weak article content, with its precious few pages largely taken by historical articles, a piece on lightning rules apparently intended to be humorous, an article on an obscure AFV, and so forth.  On the plus side, there’s an interesting article on ambush by David Olie.  Several articles are related to carriers, apparently because a number of scenarios feature them (see below).

J4 includes a sheet of 11 hedge overlays for those landscapers in the ASL world. The only other bonus content is a new SASL mission, JM2 (Bloody Omaha), which allows the player to experience a Seaborne Assault.  This ought to make SASL players smile.

Just as the magazine content is much less, so too is the scenario count; J4 contains only 12 scenarios, less than half the number its predecessor had.  Most of them are smallish, tournament-sized or less.  Half of the scenarios have an emphasis on (Bren gun) carriers, which is an odd emphasis, as they do not appear to be particularly popular AFVs among ASLers.  This means that ASLers who do not care for the tiny AFVs may feel a little shorted here.  Three exotic Indochina scenarios by Laurent Closier also appear.

The best scenarios in J4 are the Indochina scenarios: J69 (The Army at the Edge of the World), J70 (Just an Illusion), and J76 (Ultimate Treachery).  Also quite good is J74 (Priests on the Line).  J67 (The Lawless Roads) and J68 (Unlucky Thirteenth) are solid and balanced.  These are enough good scenarios to make this issue worth getting, but it just seems like less of a deal when compared to its predecessors. 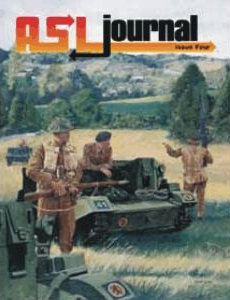