In 1998, Avalon Hill, the oldest wargame publisher in the hobby, suddenly and unexpectedly kicked the bucket, selling its intellectual properties to giant toy company Hasbro.  Multi-Man Publishing, which had for several years been developing ASL products for Avalon Hill, tried but failed to buy the rights to ASL from Hasbro.  However, they eventually succeeded in licensing from Hasbro the exclusive rights to publish ASL products.  This allowed them to continue to develop the ASL projects they had been working on under Avalon Hill and, from then, to publish new products.

The first item published by MMP as the new “official” publishers of ASL material was ASL Journal Issue One (J1), most of which was probably originally slated to appear as the never-seen ASL Annual ’98.  The Journal would be to MMP what the Annual was to Avalon Hill, though from its beginning the Journal would not include a year in the title, ostensibly “because we don’t want to be tied into  the only-once-a-year schedule that is inherent in the title Annual,” although in actual fact the Journal has averaged considerably less than one-a-year in its history.

Like most Annuals, J1 was a 64-page magazine with scenarios appearing as pages of the magazine.  It dropped the usual George Parrish gamebox art for the cover (Parrish himself had died in the 1990s), choosing instead an absolutely hideous painting by “artist” David Pentland, for whom MMP has had an unfortunate attraction over the years.

The article content is generally good–better than almost all of the Annuals–with a rules article about smoke, a gameplay article about crappy armor and another about playing the Japanese, and a Series Replay of A109 (Scouts Out).

The magazine also includes a new campaign game for Red Barricades, RB CG IV (Bled White), designed by Steve Dethlefsen and Eddie Zeman, the founders of third party publisher Heat of Battle.  If that weren’t enough Red Barricades goodness, there are also rules for bringing SASL to Red Barricades with a Chapter S addition and four SASL Missions:  r1 (Assault on the Assembly Hall), r2 (Breakout!), r3 (Hold the Factory), and r4 (Assault on Red Barricades).  Each mission can be played as either the Soviets or the Germans.

The scenario mix includes an all-time classic, J1 (Urban Guerrillas), and two other classics, J12 (Jungle Fighters) and J9 (A Stiff Fight).  Also solid are J2 (Battlin’ Buckeyes), with the American advantage; J7 (Slow and Steady), and J8 (Block Busting in Bokruisk).  There is really only one dog in the pack, J11 (In the Old Tradition).  Overall, this is a very solid set of scenarios.

With the scenarios and the Red Barricades/SASL material combined, J1 was a very nice debut for MMP and belongs in every ASL collection. 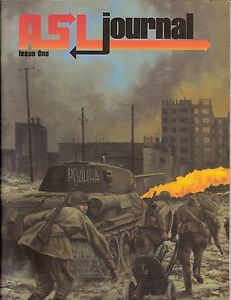