Contents:
70-page magazine, with 24 scenarios included as pages of the magazine; historical map; 1 full and 1 half countersheet; rules pages.  In 2010, MMP reprinted Journal #2 with minor changes (updating the advertising, an Internet article, etc.).

ASL Journal Issue Two (J2) was MMP’s sophomore attempt at an annual magazine devoted to ASL content, coming after an inaugural year in which they published ASL Journal Issue One, A Bridge Too far, Blood Reef: Tarawa, and Action Pack 1, plus a reprint/revision of Doomed Battalions, which saw a hasty, small release in the final days of Avalon Hill in 1998.

Perhaps giddy with those real accomplishments, MMP promised in J2 a great many new products appearing imminently, the majority of which took much, much longer to appear than anticipated or, 14 years later, still haven’t appeared.  However, J2 itself was far from an insubstantial product and certainly contained a lot of goodies with which to delight its ASL audience (except for its cover, sporting David Pentland artwork designed to delight nobody).

The “big extra” in J2 is Kakazu Ridge, a mini-HASL set on Okinawa in 1945 and featuring an attractive historical map drawn by Don Petros.  Kakazu, designed by Dan Dolan, debuts the use of “Chapter Z” rules pages for mini-HASLs (only 2 pages this time).  However, Kakazu comes with five scenarios but no campaign game; moreover, none of the scenarios really give players a chance to fight it out on much of the historical map (although a number of the scenarios are meaty).  Given its Okinawa-theme, it should be no surprise that Caves are involved, which makes this mini-HASL a rather advanced one that has seen relatively limited play.

J2 comes with 1 full and 1 half-sized countersheet but doesn’t explain what the counters are for.  The full countersheet contains many replacement counters for counter errata from various ASL products, mostly A Bridge Too Far, but also “extra” counters, mostly for use with Blood Reef: Tarawa. There are also a few counters for use with Kakazu Ridge.

J2 also comes with an amazing 24 scenarios, some of which are Squad Leader conversions or reprints from third party products, but most of which are original.  Seven scenarios are designed by Chas Smith, many of which come from an abortive scenario pack Chas was working on for his third party entity, Bounding Fire Productions, which featured the Hermann Goering Panzer Division.

Between the bonus materials and the great scenarios, it is no wonder that J2 turned out to be a popular, much sought after item.  In fact, in 2010, MMP actually reprinted the issue, the only time that has happened for an ASL Annual or Journal to date.

ASL Journal Issue Two (“2nd Edition”) commentary:  68 pages, 2 countersheets, historical map.  In June 2010, after considerable delay, MMP reprinted the long out-of-print ASL Journal Issue Two.  It is mentioned separately here because there are some noteworthy changes, though most are relatively minor.  Some of the scenarios have errata incorporated into them.  The obviously outdated convention calendar was removed; the Internet resources article was updated (it includes this site, for example).  The rout example is now the same as in the 2nd Edition ASLRB.  The errata on the countersheets has been fixed in the reprint.  Most importantly, perhaps, the Kakazu Ridge map was printed on glossy paper, not matte.  A number of ASLers, and wargamers generally, do not like glossy maps, typically on the grounds of either 1) glare or 2) durability.  It is hard to tell whether this is a vocal minority or a majority, but glossy maps definitely have their detractors.  The one good thing is that, unlike a great many glossy wargame maps, the Kakazu Ridge map is not printed on too-thin paper; this will help its durability, though cracking may still be an issue over time.  In all, though, new ASLers will be happy to get a copy of this popular ASL product.  Owners of the first version probably do not need to bother to buy it again. 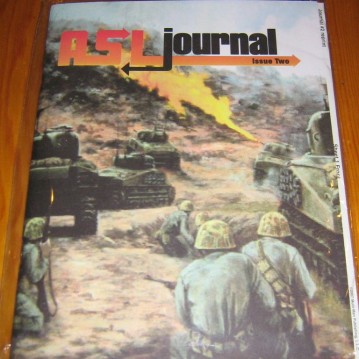