The ASL Mannual ’98 (yes, it is spelled that way) was a well-rendered and clever satire of the ASL Annual and, indeed, the entire ASL community as it was at the time, including different publishers and game personalities.  It was put together primarily by Tom Repetti, Rodney Kinney and Rob Seulowitz, with some material by Tom Huntington, Kurt Martin, Tom Slizewski, Rusty Witek and “Bob W.”

From the cover, which featured a 5+2 leader counter for “Cpl A. E. Neuman” to the letters section featuring faux letters (from Ray Tapio, Curt Schilling, and many others) to the fake rules Q&A and fake upcoming ASL products to the “tactical tips” (“Remember when rifling your opponent’s stacks to go from the bottom up–when you run into that question mark counter in the middle, just look real innocent and say, ‘Oh, gee, were the guys on the bottom of the stack Concealed?'”), no effort was left unspared to crucify, castigate, ridicule, and poke fun (sometimes more maliciously than others).  Some of it is even erudite, such as an article featuring ASL rules sections as if they had been written by St. Paul, Kipling, Marx, Derrida, Sartre, and others.  Rest assured, though, that most of the Mannual is closer to the level of fart jokes than Derrida jokes.

Much of the material would be entertaining even to new ASLers today, such as the faux scenario Gojira!!!, which pits Godzilla against the Japanese Army (supposedly some people have actually played this!).  Other material would be comprehensible mostly for someone familiar with the ASL as it was in the 1990s, such as references to the complex and detailed nature of Kinetic Energy products, and many references are in-jokes about specific ASL personalities, including Brian Youse, Terry Treadway, Steve Pleva, Carl Fago, and many others.   The only thing worse than being mentioned in the Mannual was not being mentioned in the Mannual.

There was never an ASL Mannual ’99, because the creators of the original were all brought before a firing squad and relieved of our misery. 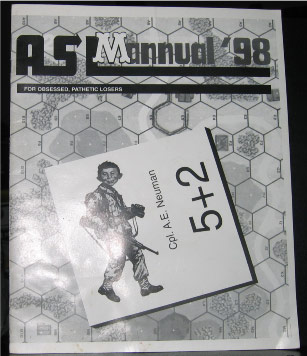