The Kansas City Irregular ASL Club has had quite a tradition of releasing new scenarios at its “March Madness” tournament.  This tradition began in the 1990s through an association with the principals of Kinetic Energy and was picked up again some years later by their successors.  The recent March Madness historical packs have been known for esoteric subjects (such as partisan battles and uprisings).  For their 2012 tournament, they originally planned something no less esoteric:  a World War I scenario pack using ASL rules.

However, progress on this pack did not occur as rapidly as they had planned, so the KCers went into their archives for a replacement.  In the years immediately after Kinetic Energy stopped producing scenario packs, one of the Kinetic Energy folks, Mike Reed, worked with Paul Works to create a different sort of special event for the March Madness tournament:  sets of “double-blind” scenarios.  “Double-blind” games or scenarios are wargames in which each side essentially only knows its own forces and goals, but may only have limited knowledge (at best) of the resources or positions of its opponent.  “Double-blind” games are often played with referees, but there have been systems devised over the years that have eliminated such a third party.  The KCers took the 2000-2001 double blind scenarios–never previously published–and added two new scenarios to create a 10 scenario pack.

The Double Blind Pack relies heavily on the willpower of its purchasers, because all of its scenarios would in effect be “ruined” if players were familiar with the scenario cards before play.  Consequently, purchasers of this scenario pack should force themselves NOT to open it up and read the scenarios, or else they will spoil their own fun.  Rather, they should wait until they are paired with an opponent, and then each player can read the materials relevant to his own side (only).  Good luck with that, eager-beavers.

Six of the 10 scenarios are World War II scenarios; the other 4 are Indochina War scenarios at Dien Bien Phu.  The World War II actions include a French-German 1940 tussle, a German assault on Polish defenders in Warsaw in 1939, a U.S. attack on a Tunisian ridgeline in 1943, a 1943 Kursk clash between Waffen SS and Soviet Airborne troops (with Desert/Steppe rules), a classic Normandy US vs German bocage scenario (on DASL boards), and a March 1945 action set in Italy involving an attack by the Jewish Brigade against a German fortified position.  All in all, a varied mix.

The Dien Bien Phu scenarios require about a page of special rules, some for terrain and others for nationality distinctions.  Aftermaths for all scenarios are provided on a separate sheet of paper (presumably so as not to give anything away).

These scenarios are not tournament-sized by any stretch.  It would not be fair to give away too many details, but suffice it to say that they are basically medium-sized to large in nature.  Each side is given his own OB, victory conditions, and a sentence-or-two description of what he is likely to face.  That makes these scenarios “double-blind lite” rather than true double-blind (because there is no referee and they will be able to see opposing forces on the mapboard), but it still introduces a “fog of war” aspect not present in the vast majority of ASL scenarios. 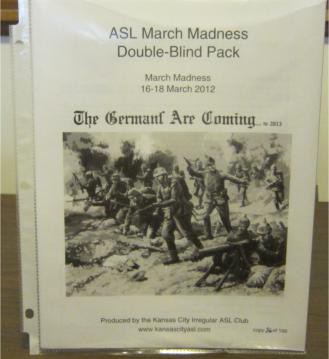