The March Madness ASL Tournament held every year in Kansas City is one of the only tournaments out there that actually provides a unique new scenario pack to attendees.  Usually around 75 or so copies are produced; about a third go to attendees and the rest seem to be auctioned off at E-bay (although a review copy of this pack was provided to Desperation Morale), presumably to help support the tournament.  The fourth March Madness ASL Tournament pack is the Irregular Forces Pack (IF), which essentially is the same theme as the previous year:  partisans and guerrillas in World War II (with an odd out-of-era trip to 1978).

It may have been a better idea to have created only one partisan-themed release for the March Madness tournament packs rather than two, because the situations depicted in the scenarios of IF just don’t seem that strong.  Three scenarios in particular are problematic, though in different ways.

First up of the three is MM01(Ust-Usa), which is essentially a gimmick scenario (in the sense that it does not depict a standard battle scenario), representing an attempt at an armed rebellion by gulag prisoners in a Soviet prison camp in Siberia.  It pits 5 partisan squads and 7 unarmed squads vs. 2 Soviet (police) half-squads, plus minor but consistent reinforcements (essentially a dr per turn that can bring in a bad leader, a half squad, or a conscript squad).  There are rules for arming the unarmed counters.  The scenario situation is problematic in that it is extremely hard to simulate such nonstandard situations in ASL and they usually don’t make for great scenarios.  MM05 (Ambushing the Warheads) is another gimmick scenario, involving German trucks with ammo trying to make it past a thin French gauntlet.

The second problematic scenario is MM03 (The Jews Have Guns!), the inclusion of which is problematic for entirely different reasons.  The Warsaw Ghetto Uprising of 1943 was not in any sense a “traditional” uprising (as was the 1944 Warsaw Uprising a year later).  Rather, it was a “symbolic” uprising of Jews who knew that they were going to die at the hands of the Germans but who decided to choose the manner of their death and die with defiance.  When the Uprising began, there was about one day of fighting that might be considered as fighting between combatants; by the third day, the Germans were simply going building to building, destroying and burning buildings and bunkers.  Though Jewish fighters might issue forth briefly for a rare raid, it was essentially a work of slaughter.  The razing of the Warsaw Ghetto, of which the Uprising was a part, was part of the Holocaust and, as such, entirely unsuited for being turned into a scenario for a game.  This is a scenario that should not really have been designed.

The third problematic scenario is MM07 (Metal-Shaba), which is problematic because it is set in 1978, decades away from the era that ASL was designed to simulate.   With hundreds of thousands of partisans fighting in World War II, it is not clear why anyone would have to go so far afield to find a partisan scenario situation.  Here the French are British and the Congolese Chinese, which illustrates the jerry rigging necessary.

The most viable scenario in the pack is probably MM04 (Is Paris Burning?), portraying the August 23, 1944, German attack on the Grand Palais in Paris during the FFI uprising in that city as Allied troops advanced on it.  It was a rare example of real fighting developing during the Paris uprising.  The Germans, however, have an unusual set of victory conditions:  they must turn 5 or more locations of a particular building to Blaze or Rubble.  It is theoretically possible, though, given the right combination of DRs, for the German AFVs to win the scenario on their own merely by sitting back and firing AP on the building, with no way for the partisans to influence the situation other than hindering flames.

Overall, then, this scenario pack, divorced from context, is somewhat disappointing, and it probably has more collectible value than play value.  However, the context cannot be forgotten; this scenario pack is in essence a labor of love designed to support a regional ASL tournament, and few others even bother to make this amount of effort.  Thus the KCI deserve praise on that score alone.  Given that their previous scenario packs have been more alluring, one rather suspects that this is merely a dip in the road; hopefully, future years will see more enticing packs. 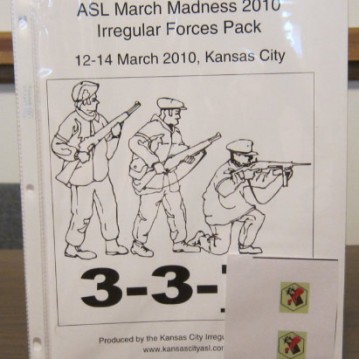