The third of the revived series of March Madness ASL Tournament packs is the Partisan Pack, a small release (allegedly only 75 copies were made) containing 8 partisan-related scenarios.

In a couple of the scenarios, the partisans have odd weapons.  In PP06 (Sturmwind on the Sopot), for example, the (anti-Communist) Armia Krajowa is armed in part with Soviet (instead of British) weapons.  In PP02 (New Year’s Party), Jewish Partisans similarly are given Soviet weapons, when such weapons were simply nowhere to be found (although this one is less problematic, as they only have LMGs and DCs).

Five of the scenarios are large, three are small.  There are no medium-sized scenarios.  Some scenarios use advanced rules, including Caves, OBA (2), Night rules (3), Rice Paddies, Battlefield Integrity (!), and Set DCs.  Overall, the scenarios are SSR heavy.

The scenario cards are nicely done, printed on thick glossy cardstock and partially colored.  They have bad organization, though (Scenario PP02 is not on the back of Scenario PP01’s card, for example).  There is also an overlay representing the Cabanatuan prison camp in the Philippines.  This is not as well-rendered, but is quite functional.  The counters that come with the pack are crude and home-made; they look as if they were printed on a printer from circa 1991.

Overall, for a small and obscure pack, it seems that a good deal of effort was put into it.

The exotic scenario topics alone might interest some people, but the scenario pack will be hard to find because it was released in such small quantities. 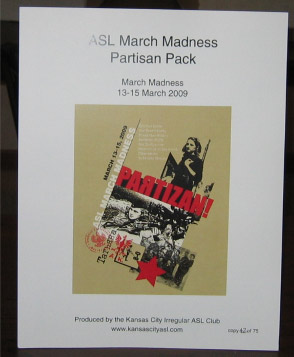