The 28th issue of ASL News (and its second issue in magazine style) came out in December 1994, on the 50th anniversary of the Battle of the Bulge.  Not coincidentally, a lot of ASL “Bulge” material would come out in the mid-1990s.  ASL News #28 was styled “The Bulge Jubilee.”

Article content includes Philippe Léonard’s usual round-up (“Notes”) of the ASL scene and all the latest official and third party releases and rumors, delivered with his usual wit; some scenario analyses; an article on U.S. armored infantry battalions; Kampfgruppe Peiper notes; notes for the Above the Prayers campaign game; and various miscellany.

Issue #28 was not only substantially larger than the preceeding issue, but it contained more “goodies” as well.  First up was a new campaign game, KGP CG IV (Above the Prayers) for Kampfgruppe Peiper, using the Stoumont map and four campaign dates.

Drawing more attention than the campaign game, however, was the first third party geoboards, ASLN1, which was printed in color in the middle of the magazine and has to be removed and assembled from its two constituent parts.  ASLN1, a river board featuring a railroad and a huge wooded hill, is barely geomorphic, fitting against other maps only on one side out of four.  Moreover, the next issue of ASLN1 would have to issue many clarifications about which woods-hill hexes were actually level 2 hill hexes.  So, as an ASL board, it was a fairly flawed product.  However, what perhaps was more important was the notion that there could be geoboards other than the official ones.  Modest as it was, ASLN1 would set the stage for what would eventually become a fairly large and diverse collection of third party geoboards from various sources.

Issue #28 even included some scenarios–not surprisingly, set during the Battle of the Bulge. 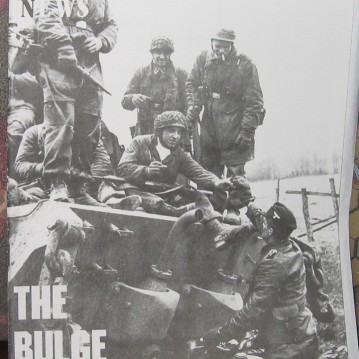