This pack features 8 scenarios, none of them particularly remarkable, that originally appeared in the European ASL newsletter ASL News.  This was the first of several scenario packs by Critical Hit that reprinted ASL News scenarios.  In these packs, the scenarios were grouped into themes (in this one, for example, the scenarios are all early war actions taking place during 1939-1941).  Unfortunately, their numbering remained unchanged from their original appearance in ASL News (and the odd ringer from the American newsletter On All Fronts), which can be confusing for collectors trying to figure out exactly what they have.

3rd Edition (Retro Pak III) Commentary:  In early 2013, as part of its attempt to hastily re-issue almost its entire catalog, Critical Hit re-released Euro Pack under the new name of Retro Pak III (Critical Hit frequently changes the names of products and/or scenarios, presumably in the hopes that people will re-buy them).  This means that all of the scenarios included here have now appeared in print a minimum of four different times and two of the scenarios five times (see below).  These are some well-worn tracks.  Little has changed in the scenarios–Critical Hit even repeats the same typos it made 15 years earlier, such as “armored cards” for “armored cars.”  However, it also adds new errata.  For example, RIII-7 (For One More Hour) originally had a 2-2-7 Belgian half-squad to represent a demolition group.  Now, the OB shows a 2-3-7 half-squad, but the SSRs still refer to that original 2-2-7 half-squad.  Sloppy.

Because the 8 scenarios date from the “early days” of ASL, they tend to be long; half of the scenarios are 8 turns long or longer.  They are a more or less equal mix of large, medium, and small actions.  Two scenarios have OBA; none use Night or Air Support rules.  One of the scenarios, RIII-8 (Salamanders into the Flames) is an all-armor scenario.

4th Edition (Euro 1: First Contact, First Defeat) Comments: In 2020 Critical Hit reprinted all of the “Euro” packs under new titles, though the contents seem to be the same other than scenario tweaks (Desperation Morale has not, however, examined these products). Most of the other titles had not been reprinted before, unlike this one. 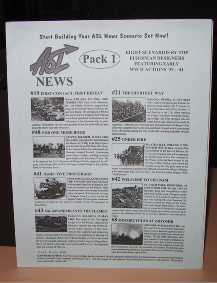