This is a no-frills pack, with 10 scenarios and nothing else. On the other hand, they are scenarios developed by the Paddington Bears, a group of ASL players from Sydney, Australia, who turned out to have a knack for fun-to-play, well-balanced scenarios. Critical Hit republished a number of their scenarios in three scenario packs (of which this is the first) and in Critical Hit Magazine.

This is a fine scenario pack, with many fun, enjoyable scenarios. Probably the best are PBP2 (The RHA at Bay) and PBP3 (Children of the Kunai), but also good are PBP5 (U.S. Forces), PBP7 (Piece of Cake), and PBP9 (Last Roundup). PBP6 (Raw Deal) is also interesting because of the order of battle choices allowed. This scenario pack is well worth getting. 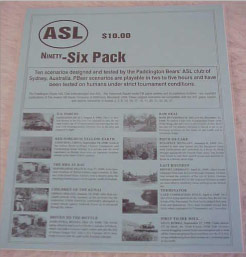