ASL Stuff was a compilation of ASL-related articles that originally appeared in the Intelligence Report, the newsletter of the Windy City Wargamer club from 1985 to 1995 (although, in terms of datable articles, nothing seems to appear from before 1989).  Louie Tokarz simply photocopied them–mid-1980s word processing and all–and put them together.  It consists essentially of a few articles written for beginning players, a number of product reviews and scenario analyses, some tactical tips, and a large number of tournament reports (ASLOK, Avaloncon, Gencon, and Chicago-area tournaments).  It also includes black and white versions of WCW1 (Will to Fight…Eradicated) and WCW2 (Scotch on the Rocks), originally printed in the newsletter and later printed as part of the WCW Color Scenario Pack; for those people having a hard time locating copies (either actual or photo) of the Pack, this may be one way to obtain at least a couple of scenarios from it.  The two scenarios were used in the 1995 ASL Open tournament.

ASL Junk, the second WCW compilation, includes articles from 1995 to 1997.  In content it is much the same as ASL Stuff:  reviews, scenario analyses, tournament reports (but no scenarios), with somewhat better production values (someone must have bought a laser printer in the 1990s).  It also includes a complete Scenario Replay.

ASL Thing was the third WCW compilation, covering the years 1997-2001.  Content is similar to the previous two compilations:  product reviews, scenario analyses, AARs, tactical tips, and tournament reports.  There are also two interesting campaign game replays, one for Red Barricades and one for Kampfgruppe Peiper.

The WCW compilations are all (but especially ASL Thing) characterized by extremely forcefully expressed opinions about scenario balance and quality in various ASL publications.  In particular, Louie Tokarz and Rich Banozic take repeated shots at MMP on scenario balance issues.  Sometimes, they are on target (they correctly identified most of the unbalanced scenarios in the ASL Annual ’96), but often they are not (for example, in his review of the scenarios in the ASL Annual ’97, Louis Tokarz labeled a number of scenarios as being very unbalanced, almost all of which, from the perspective of more than a decade’s worth of ROAR reports, he got wrong).  Similarly, the test of time suggests that Rob Banozic’s review of the scenarios in Heat of Battle’s Waffen SS:  No Quarter, No Glory got the balance in all of the scenarios wrong.  These sorts of results reveal how difficult it is to accurately gauge the balance of a scenario from merely analyzing it or just playing it one time, and suggest that it might be better to be somewhat less “decisive” in declaring that a scenario is a “dog.”

How valuable these items are may be debatable, but while much of the material (such as some of the tournament reports) may be of little value to the average ASLer, there is still material that would be of interest to any serious ASL player.  The volumes were originally sold for next to nothing, too, so they represented a fine value.  These days, one is more likely to find them on E-bay, sometimes for more than they may be worth. 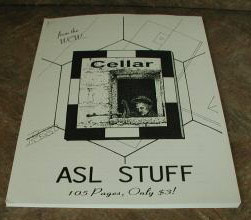