The first (and only) issue of ASL Sweden Magazine debuted with little fanfare in late 2007.  Most non-Swedish ASLers who learned about it at all happened to do so only because a copy of the magazine was offered for auction on E-bay.  It, and a couple of others, went for high prices, because it was unclear how available, if at all, it would be outside of Sweden.

The inaugural (and final) issue of ASL Sweden Magazine was a full-color 38-page magazine on glossy paper.  Most of the content is in Swedish (with important exceptions noted below), which unfortunately limits the reach of this attractively-produced publication.  Most educated Scandinavians seem to speak English, which also is the de facto international language of ASLers around the globe.  Moreover, the largest ASL audience is still in the United States.  If the magazine had been created in English (as Le Franc Tireur now is), it could probably still have reached its Scandinavian audience but also reached an international audience (which would also probably have made it less expensive to print).  Perhaps the editor, Christoffer Peyre, did not feel comfortable enough with English, or perhaps he thought that only Swedes would be interested in a magazine that had substantial content about the ASL scene in Scandinavia.

The layout and design of ASL Sweden magazine is more attractive and imaginative than most other ASL magazines, including Critical Hit Magazine and Recon by Fire, to name just two examples.  Some pages are in full color, while other pages seem to be in black and white with spot coloring.  The overall effect is good, although the frequent inclusion of large photographs and generous white space means the content is a bit light.

Content, in Swedish, includes a historical article on Swedish volunteers in Finland, what looks like a very interesting AAR (with photos) of a King of the Hill (a venerable historical module by Heat of Battle) campaign game, and an overview of the 2007 Friendly Fire ASL tournament (with descriptions in Swedish accompanied by English-language scenario descriptions of the scenarios that debuted at the tournament).

Aside from the mixed article mentioned above, English language content is light, but what is there is significant.  This includes two (very) small scenarios in English (and a page of designers notes for one of them), and a lengthy set of house rules (and accompanying explanation and justification) for Red Barricades campaign games written by Melvin Falk.

SAM1  Poles Apart.  Poland, 1939.  A 5-turn DASL scenario (using one DASL map, Map D), it features a small Polish-Soviet action outside of Wilno/Vilnius in what was then eastern Poland (it is now part of Lithuania).  The Soviets attack with 7 squads and 2 light tanks (though they enter in 4 separate turns!); the Poles defend with 3 squads, an AA gun, and an armored car (the latter two of which also enter as reinforcements).   It is a very tiny scenario.

The Melvin Falk Red Barricades article is “The Leaves Fall But Not Stalingrad” and presents, in English, a collection of house rules for Red Barricades campaign games.  The first half of the article provides the 22 house rules; the second half provides designers notes and explanations.  Some of the house rules are for greater realism, some for balance, and a few for playability.   The issue of house rules for ASL is controversial and many ASLers would be opposed to using these house rules, while others would be likely to embrace them.  Some of them seem to make a lot of sense. However, because of the extensive commentary by Falk, even people who have no desire to try the rules will find the article interesting because of the thoughts and insights by this veteran ASL player into the game. 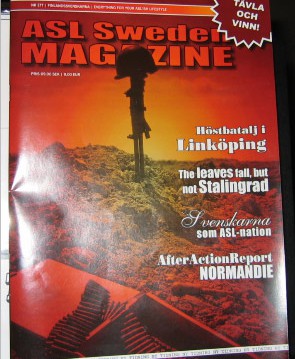