A few months after Battleschool (i.e., Chris and Helen Doary) debuted their proof-of-concept “Battledice” custom precision dice at a small Canadian ASL event, they hit the big time by releasing another set at the largest ASL event in the world, ASL Oktoberfest (or ASLOK, as it is known), in Cleveland, Ohio.

In 2010, ASL celebrated its 25th anniversary and Battleschool created a set of commemorative precision dice to mark the event.  BattleSchool sold a limited edition set of BattleDice.  These sets of 4 used 5/8″ (16mm) dice:  2 white, 1 dark blue, 1 red.  One white die, in lieu of the “1” on the die, displayed an image of the German soldier holding a pair of binoculars that formed part of the original and iconic cover of Squad Leader; the other white die had a similar image of the iconic Soviet soldier from Cross of Iron.  The blue die features a German Iron Cross medal, while the red die features a Hero of the Soviet Union medal.

In addition, an apparently even more limited number of these (20 sets initially, though more later may have been made) also included the gold-stamped word “Gröfaz” on the “2” face; the word is a German acronym for the sarcastic phrase used to refer to Hitler (“greatest leader of all time”) and is the name of the award for winners of the ASLOK main tournament.  These were obviously designed to tie-in with the tournament itself.

The dice are very attractive.  Being precision dice, they presumably are well-balanced.  BattleSchool says that they are the same quality as dice used by professional backgammon players (and presumably are obtained from a company that makes the same).  The custom images are not engraved; rathery, they are applied using a hot-stamp foil process.

The main problem with the 5/8″ (16mm) dice is that they are too large to be used with many dicetowers–the dice will not enter them or will enter but get stuck.  The other two sizes that BattleSchool uses, 9/16″ (14mm) and 1/2″ (12.5mm), are much better in this regard (it would be nice if BattleSchool would pick a size like 9/16″ and standardize it, using it for all their dice). 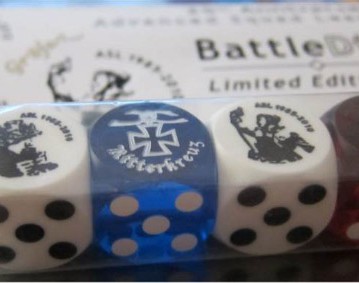