Like the 2010 set, the 2011 set contains 4 5/8″ (16mm) precision dice, each of which has a special face to replace the “1” face of each die.  The set includes two white dice, one orange-ish die and one green die (meaning the colored dice do not overlap with the 2010 set).  Whereas the 2010 set had white dice featuring the German and Soviet soldiers from the original Squad Leader and Cross of Iron sets, the 2011 set features white dice bearing images of the British soldier from Crescendo of Doom and an American G.I. from Paratrooper.  And where the 2010 colored dice featured German and Soviet medals, the 2011 dice feature images of the Victoria Cross and the Distinguished Service Cross (allegedly easier to depict than the Medal of Honor).

The dice are “precision” dice, meaning they have been carefully balanced, like dice one might find at a casino.  They are very attractive.  The only knock on them, which was also the case for the 2010 set, is that, at 5/8″ each, they are a bit large for smaller dice towers and will get stuck.   Reportedly, only the two “anniversary” sets will have 5/8″ dice; all other Battleschool dice will be 9/16″, which is compatible with a larger range of dice towers (2014 note: that did not last long and dthere were more 9/16″ dice made later).

Well, there is one other knock; at $35 (or $40 if you purchase the “variant” that also has the word “Grofaz” appearing on the “2” die face), these sets ain’t cheap.  They are not really for casual purposes, but more for someone who already really wants some precision dice, someone who wants all his ASL stuff to have that “extra coolness,” or someone who wants to purchase anything ASL-related.  There are a fair number of all these types in the ASL world. 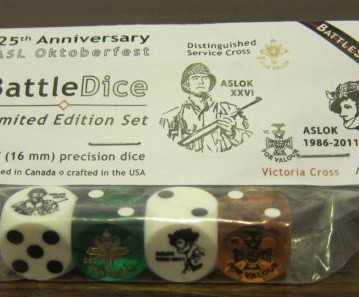